USPS strikes back with promise of free tracking on all parcels

The US Postal Service is making a major effort to fight its way back into contention in the US package business, with a bid to make track and trace services the norm for all products. From this fall, the USPS is to offer free track and trace services for all commercial parcels that have a full-service Intelligent Mail barcode, initially excepting Lightweight Parcel Select parcels, the former Standard Mail parcels category.

Jim Cochrane, vice president of product information at the USPS, told the National Postal Forum yesterday that in the long-term, the newly rebranded USPS Tracking service would offer free visibility on all items.

From January, with approval from the Board of Governors, the USPS is aiming to offer visibility on all parcel products, he said, adding that the Postal Service is also looking at increasing visibility in other mail products.

“By October 1 this year we will have tracking that is every bit as good as anybody else in the marketplace,” Cochrane declared yesterday. “This will be the basis for our growth here.”

The package business is one of Postmaster General Pat Donahoe’s top priorities for chasing growth at the moment, with the organisation currently seeing success from its flat-rate box products under the “If it fits it ships” slogan, but also from advertising the fact that the Postal Service is not imposing fuel surcharges.

Visibility has been a key weakness of its service, which the USPS is now seeking to turn around. “The package business gets it,” Cochrane said. “At UPS or FedEx it’s a universal part of their business.”

The Postal Service has been investing in scanning technology across its network, including use of OCR technology, passive scanning systems and more than 1,500 ring scanners for processing plants cannot use full systems, so that “nothing will leave a processing plant without a scan”.

The network is being set up to get from four different scanning points during the mailing process to 10 tracking events on every piece, said Cochrane.

Mailers at the National Postal Forum were excited by the prospects of the USPS visibility promises, particularly for the low-cost Priority Mail services, although speaking to Post&Parcel, Postal Service customers noted that it had been a long time in coming. 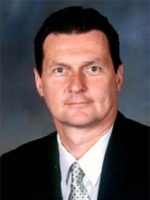 Addressing the Association of Priority Mail Users at the National Postal Forum, Cochrane said a lot of American businesses did not know about the value of Priority Mail, the Postal Service’s second-tier premium shipping service.

He said despite the low shipping prices compared to rival shippers, people in the US perceived reliability issues in USPS transportation and service performances.

Cochrane said all that should change with the offer of 100% visibility and tracking.

“We are making a pretty significant (step forward) from a world where we just confirmed delivery to one where we are providing tracking and tracing on every product.

The Delivery Confirm service is being phased out, to become part of a new USPS Tracking service offering visibility across the mail process.

Cochrane told Post&Parcel that the Postal Service had “backed off” from setting deadlines for its customers to use the Intelligent Mail barcode system, and will instead seek to entice them to use IMb.

“We took a look at the full-service requirements and there were some that were somewhat complex,” he said. “We now want to focus on the value of our full service offering – and make it so compelling that customers will want to use IMb.”

As well as allowing the USPS to compete with rivals where track and trace is now standard and conventional, the increased visibility will also allow the Postal Service to further improve and optimise its network in ways never possible before. Cochrane said it would help with spotting bottlenecks and reducing delays.

The system currently measures service to 300 zip codes, but the plan is to measure performance in all zip code areas from October.
Meeting business expectations was more about providing a consistent service, the USPS VP said.

“Customers want consistency – 98% of shipments in three days is better than 80% being delivered in two days,” he said. “We want to get to ‘world class’, and that means we have to get beyond the mid-90s to the high 90s (in service reliability).”

The IMb system would also help USPS to optimise the size of its network, more effectively responding to the volumes flowing through the system, Cochrane said.

The Postal Service is currently in the process of a major consolidation effort to reduce the excess processing volume in its infrastructure, with mail volumes having declined to levels not seen previously since 1993.