The US Postal Service is looking to close hundreds of mail processing plants across the United States as the next step in its plan to bridge a $20bn black hole in its finances up to 2014. Executives revealed their initial ideas on a plan that would see the 508 area mail processing plants (AMPs) on the current network slimmed down to less than 200.

The radical plan is set to begin in February 2012 with such dramatic speed that expectations are for all consolidations to be carried out by the end of next year.

USPS wants to eliminate up to 50% of its processing machinery that is often being used as little as four or five hours a day, consolidating it into fewer plants so that the equipment sorting letters and flats operates no less than 20 hours a day.

Some mail will be held back up to a day in order to ensure machines can run full time from noon to 4am every day.

The Postal Service will have to gain regulators’ approval for the closure of so many plants, and after consultation with stakeholders next month, it plans to file proposals with the Postal Regulatory Commission in October.

“The can can’t be kicked any longer,” said Postmaster General Pat Donahoe as he discussed the $20bn hole in the USPS budget that must be closed in the next few years.

“We have to do these things in order to keep this place solid financially. UPS and FedEx do this kind of thing when they need to – they had a lot more facilities five or ten years ago.”

Along with major cutbacks, Donahoe wants to take USPS pension and benefit systems independent and move from six day to five day per week mail deliveries. 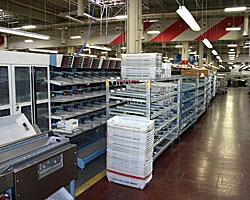 During the next 10 years, postal executives are forecasting that Standard Mail will stabilise at just shy of 100bn pieces a year, but believe First Class Mail volumes could almost halve by 2020 to just 39bn pieces a year.

The “devastating” drop in First Class Mail is happening much faster than expected, and is predicted to cost USPS more than $14bn a year in revenues, said USPS chief financial officer Joe Corbett.

Last year, the Postal Service consolidated 57 of its area mail processing plants, while even before the Network Optimisation Initiative another 65 AMPs are currently awaiting closure.

As agreed with unions, studies will carried out on the next wave of plants identified for possible consolidation, though the studies are set to be carried out alongside the Postal Regulatory Commission’s review of the consolidation plans, allowing for action to begin in February or March 2012.

As well as a major impact on staff and job numbers, the USPS executives told mailing industry groups in its Mailers Technical Advisory Committee yesterday that there will be significant impacts on nationwide service standards.

Speaking to Post&Parcel, USPS vice president of network operations Dave Williams explained that for overnight services where items are delivered within one to three days, the revised service standards would see items taking two to three days.

“In order to get processing into these 20 hour windows, we are going to have to revise service standards,” he said.

As well as reducing plant overheads, Williams insisted that the consolidation of mail processing would bring major benefits in other areas too, such as in transportation.

“As well as significantly reducing our footprint, we will see transportation benefits as the density of our trays will be much higher, trucks will be fuller and we expect to pull many miles out of our transport network,” he said.

Mailing industry representatives at the MTAC meeting applauded the consolidation plans announced by USPS, and that USPS had recognised the need to cut out its excess capacity.

There was some surprise that the action had not been taken earlier, given the declining mail volumes and the multi-billion dollar losses being recorded over the last few years, and some MTAC members expressed doubt whether USPS could achieve its full consolidation ambitions in such a timeframe.

Regarding changes in service standards, mail industry experts told Post&Parcel that mailers would not be ecstatic, but would most likely understand the reasons for the changes being made.

The details of the USPS Network Optimisation initiative emerged yesterday just days after the Postal Service revealed its intent to cut its full-time workforce by 220,000 by 2014 to around 425,000 career workers.

Some of these employees will be lost by attrition, with Donahoe saying yesterday that 157,000 staff are currently eligible to retire right now, while 250,000 will be eligible within three years.

While trimming full-time staff, there will also be some signifiant additions of non-career, part-time and temporary staff, with union agreements set to allow even full-time staff to be sent home when not needed to help save costs.

The key depending factor in this will be breaking lay-off clauses in its union agreements, for which USPS may need Congressional assistance, but the Postal Service also needs the unions to agree to allow use of more part-time non-career workers – something the American Postal Workers Union has already agreed.

Elsewhere, the Postal Service announced plans at the start of this month to close up to 3,700 post offices, a proposal the PRC is currently reviewing. Yesterday, however, the USPS CFO said in the long-term the USPS will likely need to close post offices in the tens of thousands, rather than the thousands.

“Ultimately we can’t be thinking about closing 3,700, we have to be thinking 20,000,” he said, hinting that Congressional opposition to post office closures appears unlikely be backed by financial support for the struggling Postal Service: “When you look at the numbers of people that are using these post offices, we can only afford so many unless someone is going to hand us a check – which we see as extremely unlikely.”

Following on from retail and processing infrastructure cutbacks, the USPS is also now casting its eye on how it can reduce its delivery costs, since more than half of the workhours at USPS are now spent in delivery.

Corbett said in terms of the amount of efficiency improvements that can be achieved in the USPS simply by taking out workhours through automation and improved processes, “we are now running out of tricks”.

He said: “We have been outpacing the decline in mail volumes in taking out workhours – but it’s now getting tight. The last piece of automation is going in right now. What we really need to focus on now is delivery – more than half the time spent by the Postal Service is related to delivery.

“It is becoming clear we need to do something about the hours in delivery,” said Corbett.

Route consolidation is already being undertaken where new flats sequencing machines are reducing manual pre-sort times, but a further reduction in route numbers is expected.

A big part of cutting delivery costs will be the move to abandon Saturday deliveries – something that USPS executives are still confident that Congress will eventually allow, though time is running out in this legislative session.