US low-cost parcel service takes on FedEx and UPS

A major new parcel shipping alternative to FedEx, UPS and the US Postal Service launched today in the United States, geared specifically to small and medium-sized shippers. EquaShip has been put together by a team of former UPS, Amazon and DHL veterans making use of third-party logistics and transport partners led by Minnesota-based Blue Package, Inc.

The new shipping services are being rolled out over the next three weeks across the United States – starting today on the East Coast, up to November 8 in West Coast areas. Customers will be able to sign up for shipping services, to be “activated” when pick-up or drop-off facilities are available in their area.

EquaShip is basing its pricing on weight and distance, rather than dimensional weight, and promises no hidden “accessorial” surcharges like fuel or residential surcharges.

And, the company states that all customers will pay the same rates, so that smaller shippers do not end up subsidising their larger rivals’ shipping services.

Ron Wiener, EquaShip CEO and founder, told Post&Parcel in an interview that over the past six months his team had found ways to cut costs from initial expectations of undercutting UPS and FedEx by 10-30% to the current pricing, which states that savings of 26-88% are possible versus the existing shipping giants.

On international shipments, making use of the public sector postal network via USPS, even bigger savings are possible, EquaShip says, of 70-88% over fedEx, UPS and DHL.

As well as Blue and fellow third-party partners, the Seattle-based company will be working closely with USPS itself, which will provide the “last mile” delivery for domestic parcels and the “middle mile” for parcels sent internationally, with foreign posts providing last-mile deliveries in 168 countries.

With a new call centre and expanded work force, Wiener said he was confident his service would be capable of handling demand for the alternative shipping offering.

Expectations are that customers will try out EquaShip with small quantities of shipments to test the service, before deciding to switch over major accounts.

“We can handle hundreds of thousands of packages in the first month. Millions probably by the second month,” he said. “The good news about launching this late in the year is that we’re not going to stress the capacities of our carrier, because their business doubles this time of year.” 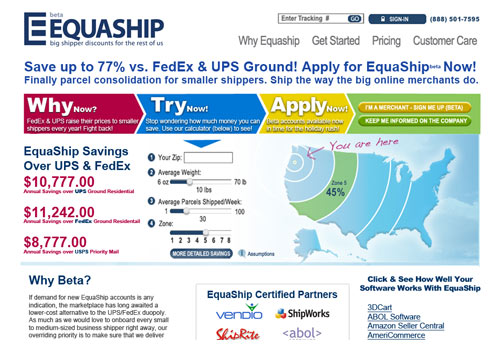 Developed over the past year or more, the EquaShip service is particularly geared towards e-commerce shippers, especially those hit hard by residential surcharges from other shippers.

EquaShip has struck up important relationships with software developers that will see its services added to popular website “checkout” facilities, so that EquaShip appears as the fourth major carrier alongside USPS, FedEx and UPS.

“None of us had expected to sign up as many software partners as we have,” said Wiener with some satisfaction. “To have a couple of million shippers seeing Equaship on Tuesday – that was not anywhere in our business plan.”

The EquaShip website itself is in a “beta” phase for the next few months, to take on board improvements in its initial use by the general public. One of the focuses of the website is an online calculator that can compared prices for different shipments between basic FedEx, UPS and EquaShip prices.

Wiener said the system was all about making prices clearer for shipping customers.

“The other day somebody sent me the UPS guide to reading your bill. It’s 31 pages long,” he said. “The advantage we have is, we’re limited in the number of services we’re offering. But we have zero accessorials, and so you can get very easy comparison.”

While the original EquaShip business plan was focussed on small e-commerce shippers,through the year it has become clearer that there is also a lot of interest from medium-sized shippers looking for an alternative to the FedEx-UPS “duopoly”.

Wiener said that now it was becoming clearer that as well as business-to-consumer shippers, increasingly there is also a lot of interest from business-to-business shippers.

“We were really targeting much smaller customers – the guys that don’t have account reps,” said Wiener. “We kept wondering why UPS and FedEx are downloading hundreds of copies of of our pricing handbook… It finally dawned on us the last couple of days – we started getting calls from more and more folks who were shipping hundreds of packages a week, telling us that our prices are better than what they’re getting at FedEx and UPS.”

As a result of the slight shift in business model, EquaShip has reprioritised its on-demand and scheduled pick-up services, rather than having a collection infrastructure dominated by the use of drop-off boxes.

But, the EquaShip CEO insisted that the original plan of having equal prices for “the little guy” was still very much in place at EquaShip.

Leading up to today’s launch, one of the most recent achievements for EquaShip has been arranging its international services, in partnership with the US Postal Service.

EquaShip will ship items from the US up to four pounds in weight, which it believes covers around 80% of international ecommerce demand.

Wiener said his company’s international offering was attracting interest because as with domestic services, prices are not based on dimensional weight.

“A one pound package that we can send anywhere in the world for about $15 – that same package if it’s any bigger than a cigarette case is going to be $150 typically with UPS or FedEx on their least costly service,” he claimed.

He said rivals might get a package overseas a little quicker – EquaShip offers a 6-10 day service – but he said that it would very much suit ecommerce shippers. But, he also noted that going via the USPS, customs arrangements were easier.

“A private carrier has a big disadvantage when handling customs,” said Wiener. “When you deal with the posts, the Universal Postal Union has had treaties between countries for 140 years, so you’re able to get the packages through faster with a lot less handling.”

He added that by using foreign posts to deliver international items, senders could access more addresses, including military addresses and PO boxes.

The EquaShip CEO said with a chuckle: “There was a tweet the other day from one shipper, who said: UPS can’t find my house, but they mailed me a letter to tell me that they couldn’t find my house.”