Increasing labour costs and declining letter volumes in the mail business has seen profits slipping slightly at Deutsche Post DHL during its third quarter of the year. The German post and logistics giant released its latest results today, showing group revenues up 5.7% during the three months to the end of September 2012, compared to the same period last year, to EUR 13.8bn.

But net profit fell by a little less than 1% to EUR 385m for the quarter.

The weaker third quarter has nevertheless allowed Deutsche Post DHL to maintain a 5.8% growth in its EUR 40.9bn revenues over the nine months of the year to date, during which time net profits have increased by 13% compared to the same period last year, to EUR 1.1bn.

Detailing the results today, top executives noted that results had been impacted by one less working day during the quarter compared to last year’s Q3, and that the company had to pay off a VAT settlement during the quarter.

But they attributed the fall in underlying profitability to the Mail business, which along with ongoing letter volume declines has been hit by higher wage costs, under new union deal bringing in a 4.5% pay increase since April.

Parcel growth has countered some of the impacts of the 3.8% letter volume decline, but in a “difficult” economic situation, the mail business saw its sales dip by 2% in the quarter, with earnings down by more than 18%.

Deutsche Post has also stepped up its investments in its letter and parcel networks to streamline operations and steer capacity towards expectations of more parcels flowing through the system in future.

Today the company executives said the last quarter of the year should bring additional growth, thanks in large part to Christmas and the peak of ecommerce, which should see the group reaching its targets for the year as a whole.

As a result, Deutsche Post DHL confirmed previous guidance on share earnings for the full year, with performance proceeding largely as expected, but with the company’s tax rate likely to be around 24% for the year, instead of the forecast 27%.

“Despite the volatile environment, we are very optimistic we will reach our targets,” said chief financial officer Larry Rosen. “Going forward we expect further solid business development in a volatile environment. We will be supported in this by ongoing solid growth in parcel and time-definite international [express].”

The Deutsche Post DHL CFO added that the company was focusing on optimizing its cost structure and developing its flexibility. 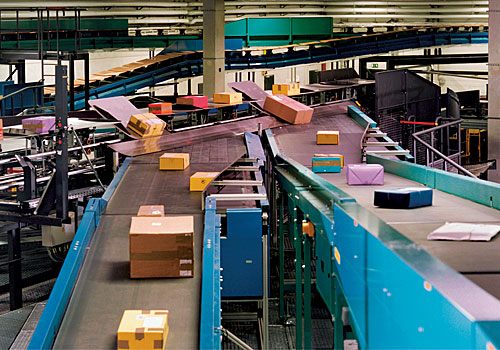 Deutsche Post DHL has been investing hundreds of millions in its letters and parcels network, with expectations of more parcels and fewer letters

The group’s third quarter performance overall was clearly pulled down by its mail division, which saw its revenues fall by 2% in the quarter to EUR 3.2bn, while earnings before tax slumped 18.2% to EUR 247m.

Parcels now generate a quarter of Mail revenues, and saw double-digit revenue and volume growth during the third quarter. Much of the growth has come from the shift from physical to online retail, the company said.

The mail business now accounts for less than a quarter of the total Deutsche Post DHL group revenue. Express and Global Forwarding and Freight have edged their contributions upwards, but the Supply Chain appears to have achieve the biggest growth in contribution to the group as a whole during the third quarter.

Express, which accounts for about 23% of the group’s revenues, achieved a 9% growth in the third quarter, up to a EUR 3.2bn revenue for the three months. Express earnings before tax were up 6.9% in the quarter, to EUR 231m. Deutsche Post said it had double-digit revenue growth in all worldwide regions other than Europe, with particularly good business in the US and in Asia.

Global Forwarding and Freight achieved a 5.6% growth in third quarter revenues, to EUR 4bn, and continues to contribute about 29% of group turnover. It has seen improved purchasing conditions in the air freight business keeping revenues stable while ocean freight has seen double-digit growth rates. DHL has a selective strategy about taking on new business that is seeing it avoiding potentially loss-making contracts. But, much of the growth in revenues stemmed from favourable currency effects.

In the year to date, the Global Forwarding and Freight division saw a 4.6% growth in its EUR 11.6bn revenue and a 11.6% increase in earnings before tax, to EUR 346m.

With a 10.4% year-on-year growth in Q3, the Supply Chain business brought in EUR 3.7bn in revenue in the quarter, about 26.5% of group revenue overall. The division has seen strong demand in automotive and life sciences/healthcare sectors. In the nine months of 2012, supply chain revenues have increased by 9.6% year-on-year (to EUR 10.6bn), while EBIT grew 4.2% on the same period last year (to EUR 301m).

Looking ahead, Rosen said he expected “moderate but positive” developments for the year as a whole with “strong growth” from 2013 to 2015.

Rosen said after 2013, the company was expecting to make fewer investments in its network, and should also see its pension obligations declining “slowly but surely”, helping with cash flow.

Executives were unclear how January’s postage rate increases would impact on the business, but said parcel growth would continue with expectations of a 5% growth next year, helped in the B2C market by Deutsche Post’s network of 2,500 Packstation parcel terminals.

Deutsche Post sees an advantage of its set-up, compared to rival mail delivery firms, in that it uses the same delivery network for letters and parcels, so as one product declines and the other grows, one counterbalances the other to support the fixed costs of the network.

Rosen said: “If out forecasts are correct, mail (volumes) will decline by 2-3% a year and parcels will grow by 5-7% by 2015. Parcels will become ever more important for the whole mail division, and thus we stand a better chance of leveling off the growth in the whole division.”

Frank Appel, the Deutsche Post CEO, said the company’s cost-cutting efforts would continue going forward, but were proceeding as a constant and systematic process, rather than a particular initiative.

“We are optimising in all fields, and I think it is necessary because only then are our margins and earnings targets achieved,” he said. “We can do this because we are continually training our people in this.”

Appel said employee numbers had grown slightly in the group overall in the third quarter, but said he would never make forecasts on what kind of job cuts might come from cost-cutting efforts.

USPS: There continues to be great uncertainty over the future impacts of the pandemic on the Postal Service

XPO: e-commerce continues to be a huge tailwind for us