Global shipping giant UPS warned investors on Friday that its results in the fourth quarter were affected by its struggles with this year’s peak season. The world’s largest package delivery company said it faced higher costs because of “unprecedented” volumes from online shipping — and a last-minute surge in orders as consumers scrambled to cope with a shorter than normal holiday season.

December’s weather in the United States also took a toll on service levels.

E-commerce analysis firm comScore suggested that online spending in the US grew 10% year-on-year in November and the first three weeks of December, up to $42.8bn.

UPS said it took on 85,000 temporary employees to help with its busiest period on record, 30,000 more than originally planned.

On a reported basis, UPS said the year’s diluted earnings would be $4.61 per share.

The company’s full results for the fourth quarter 2013 are set to be revealed on 30 January.

Last year the Atlanta-based shipping giant saw its busiest delivery day on 20th December, when it delivered 28m packages around the world. This year it had been predicting 16th December as its busiest day, forecasting a 34m package delivery volume for the day.

Overall, UPS has delivers about 4.1bn items per year, with about 399,000 employees worldwide.

Both UPS and rival FedEx received bad press and social media flack in the United States over the festive period as they contended with the record delivery volumes and difficult weather conditions.

FedEx issued a statement backing its 300,000 staff for achieving “outstanding” service, declaring that it experienced “no major service disruptions” in the week before Christmas despite the heavy volume.

UPS was perceived to have bigger problems than FedEx, but delivers more packages than its Memphis-based rival, which predicted moving 22m packages on its busiest day this season.

UPS conceded earlier this month that the volume of air packages in its system had exceeded network capacity.

Facing anger over late Christmas parcels, UPS brought in extra workers on Christmas night to sort packages at its hub in Louisville, Kentucky, to deliver items the following two days.

The company also offered some refunds to customers shipping items by air or internationally.

The big winner over the festive season in the United States appeared to be the US Postal Service in terms of reputation and media coverage, although its package volumes are not as high as FedEx or UPS. USPS said it saw a double-digit increase in package volumes compared to the 2012 festive season, higher than projected.

The Postal Service said it monitored volumes in early December and adjusted its network accordingly, adding three Sundays to its delivery schedule. 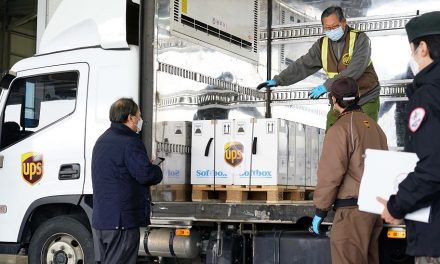 UPS to help Asia Pacific “stamp out this pandemic”

UPS: As we look past 2020 into the new year, we are optimistic