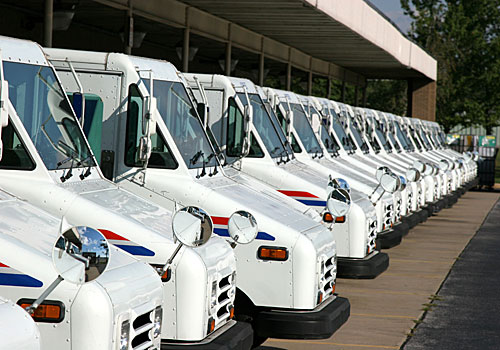 An audit of the US Postal Service delivery fleet has found that current vehicles can only sustain services until 2017 but that replacement plans have not yet been fully funded or approved. The USPS fleet is one of the largest fleets in the world, comprising 212,000 vehicles including 190,000 collection and delivery vehicles. Of these, 142,000 Long-Life Vehicles are already nearing the end of their life, or exceeding their 24-year expected service life.

The USPS Inspector General said the Postal Service developed a short-term plan three years ago to purchase 25,000 vehicles for $500m to replace some of these vehicles up to 2016.

It also said a long-term plan looks at purchasing the next generation of delivery vehicles from 2017.

However, the Inspector General said neither plan had been approved or fully funded after three years of trying, and warned that replacing vehicles could take more than 10 years.

At the moment, USPS vehicles are usually repaired when they break down, which can be more expensive than replacing them.

Last year the federal agency launched an interim plan to spend $276m on new vehicles for rural routes, but owing to the Postal Service’s liquidity problems, only a portion of the plan was funded, with USPS approved this January to buy just 3,509 vehicles as a “stop-gap” measure.

“The Postal Service will still have enough vehicles to sustain delivery operations in the short term,” said the auditors, but said unexpected issues like growth in the number of motorised delivery routes required could lead to vehicle shortfalls.

The Postal Service doesn’t exactly have a lot of cash lying around for replacing its vehicle fleet at the moment. Currently $15bn in debt to the US Treasury with no more capacity to borrow, while making annual losses running in the billions, it would need more than $5bn to completely replace its fleet.

Nevertheless, the Postal Service told the Inspector General it will develop a long-term fleet replacement plan.

Edward F Phelan, Jr, the USPS Vice President of Delivery and Post Office operations, told the Inspector General that a group comprising representatives from supply management, engineering and delivery programmes, has “begun the process” of formalizing a fleet replacement strategy.

“The long term fleet replacement strategy will be developed by January 2015,” he pledged.

The Inspector General’s audit noted that the cash crisis at the Postal Service has impaired its ability to maintain and improve business assets, including delivery vehicles. The report warned that delivery vehicles are “critical” to the universal service, but said the current strategy of merely repairing vehicles that break down was “not cost effective”.

Vehicle operating costs, not including fuel, have risen by almost $100m a year since 2007 as the fleet has continued to age.

A special increase on postal rates, which is subject to legal review, would provide $2.8bn in extra revenue, some of which could be used for vehicle replacement, the IG suggested.

In its report, the Inspector General urged USPS to consider emerging vehicle technologies and issues like the growth of the package market when it comes to replace its vehicle fleet.