Package Guard aims to “put porch pirates out of business” 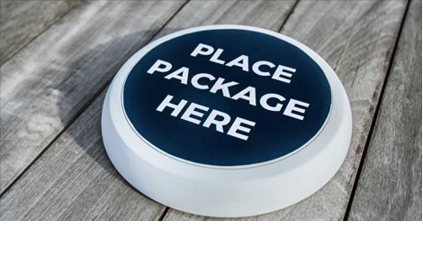 Seattle-based entrepreneur Michael Grabham has launched a product called Package Guard which he claims will “put porch pirates out of business”. In a statement issued last Tuesday (8 March), Grabham explained that the Package Guard is a “Frisbee-sized alarm device” that can be stationed at your front door, establishing a clear delivery location with the text “Place Package Here”. Once the delivery is placed on the Package Guard, the alarm is armed – and then the only way to remove the package without sounding the alarm is to enter the correct passcode in the app.  So, it’s a bit like a parcel box – without the box. But Grabham said that the device’s simplicity and “few moving parts” is an advantage, making it more reliable and easy to manufacture. It also means it could handle drone deliveries.

“In the near future,” according to Grabham, the Package Guard  “will also integrate with some of the major surveillance camera brands, so you can get a picture of the thief and share it with police or on Facebook to warn other neighbours”.

Grabham has started a fund-raising page on the crowdfunding website kickstarter.com. When we reviewed the page (at 16:20 GMT on 15 March), Package Guard had signed up 242 backers and received pledges for $10,466. The company has a goal of $45,000, with 24 days to go. (Kickstarter is a bit like the TV show Dragon’s Den. The project will only be funded if it makes its target – £45K – by the deadline, 9 April.)

The Package Guard’s kickerstarter.com notice added: “We will be using the funds to create the molds for manufacturing and to complete the FCC certifications for the device. We also need to complete the packaging design. We have already had the IOS app designed but we are waiting to build that later in the year. (At no cost to any backers on Kickstarter). This could be a stretch goal for this campaign to build the app right away.

We have filed the provisional patent and will need some money, $5,500 -$7,500 to get the final patent completed by May. We have been talking to two manufacturers that we could be working with if we are successful here and depending on the amount of units that are pre-ordered.”