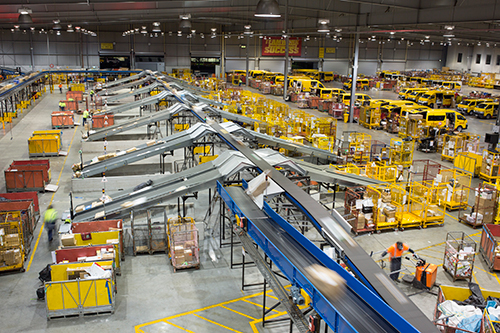 “It will give New Zealand Post Group the biggest parcel sorting platform in New Zealand and increase the reliability of our delivery service,” said Stewart.

Installation of the new equipment will begin in January 2017 and will replace the current semi-manual process.

“The new equipment means parcels will be sorted four times faster than they are now,” continued Stewart.

“Our customers will also be able to track their parcels at an earlier stage in the delivery process, and there will be fewer misrouted parcels as the machines sort with incredible accuracy.”

The distribution hub, known as the Southern Operations Centre, is due to open in May 2017 in Christchurch Airport’s Dakota Park. It will house courier, road and air freight operations, and the new automated parcel processing facilities.

New Zealand Post said that the building work on the new hub is “well underway”, with the structural steel sections for the warehouse area going up this month. The final hub will be made up of two warehouses with a covered interchange between them.

Stewart said that New Zealand-based Daifuku BCS was a proven supplier, which had previously installed the parcel sorting system at Post’s Auckland Operations Centre in 2009.