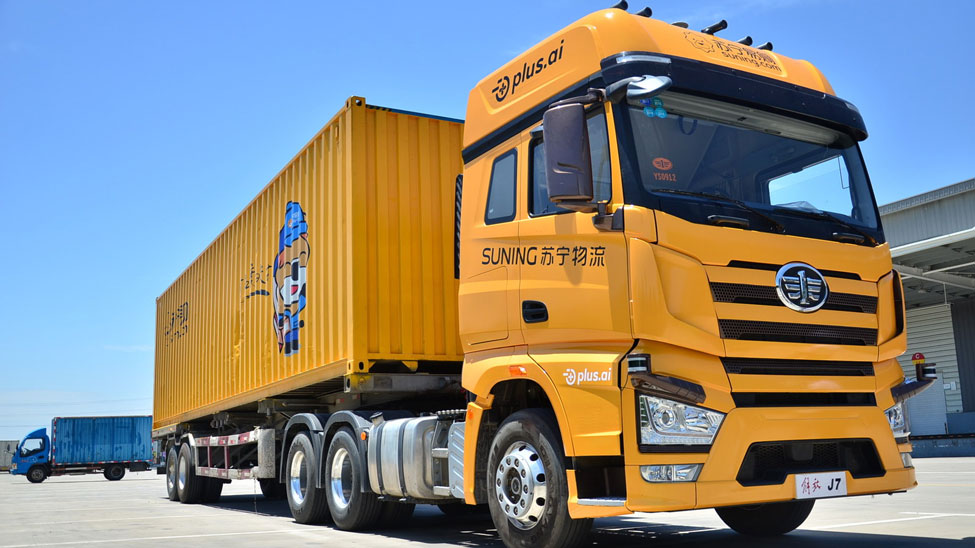 In a statement issued yesterday (24 May), Suning said that Strolling Dragon – the largest unmanned truck in its automated fleet – has “Level-4” self-driving capabilities, which means it can operate without human input within pre-programmed parameters.

It is the first self-driving truck developed by a Chinese e-commerce company to pass logistics campus tests and highway-scenario road tests in China.

“Suning’s goal is to develop its logistics business into the biggest and most intelligent retail infrastructure network in China. The promise of automation solutions will not only boost efficiency in Suning’s logistics operations, but also benefit the industry, and consumers, by offering more possibilities, and a better shopping experience.”

Strolling Dragon is equipped with artificial intelligence (AI), deep-learning technologies, rader and what Suning describes as a “superhuman vision” that enables it to accurately recognize obstacles at a distance of over 300 meters, even at high speed. In addition, the unmanned truck can make emergency stops, or avoid obstacles at a response rate of 25 ms, allowing for safe autonomous driving even at a speed of 80 km/h.

Suning said that Strolling Dragon is just one of the futuristic innovations that it is working on. Last year, for example, the company launched its Automated Guided Vehicles (AGV) warehouse ahead of the “11/11” online shopping festival in November. In April this year, Suning Logistics rolled out its “Biu” autonomous delivery robots (and in January the company also unveiled its unmanned and automated Biou concept retail store at the CES show in Las Vegas).

In yesterday’s statement Suning set out how it plans to continue its investment in innovation: “Suning will continue to collaborate with technology firms to build a smart logistics system in which self-driving trucks, automated vehicles and robots work seamlessly to do the delivery job for humans.

“When considering the implications of applying automation technology to vehicles, Suning’s plans call for drivers to be assisted rather than replaced, for the foreseeable future. The relatively complex and tiring job of long-distance driving puts drivers in high risk of accidents, while automation helps reduce such risk. With the help of self-driving technology, Suning Logistics can help create a more comfortable, and safer, working environment for over 100,000 truck drivers working for the company.

“AI technology can reduce logistics costs for logistic firms, which will find it increasingly difficult to hire long-distance drivers in China’s aging society. Although current laws and regulations in China ban self-driving vehicles on public roads, automated trucks will likely get the greenlight first as technologies advance and the government improves rules to accommodate innovations.”