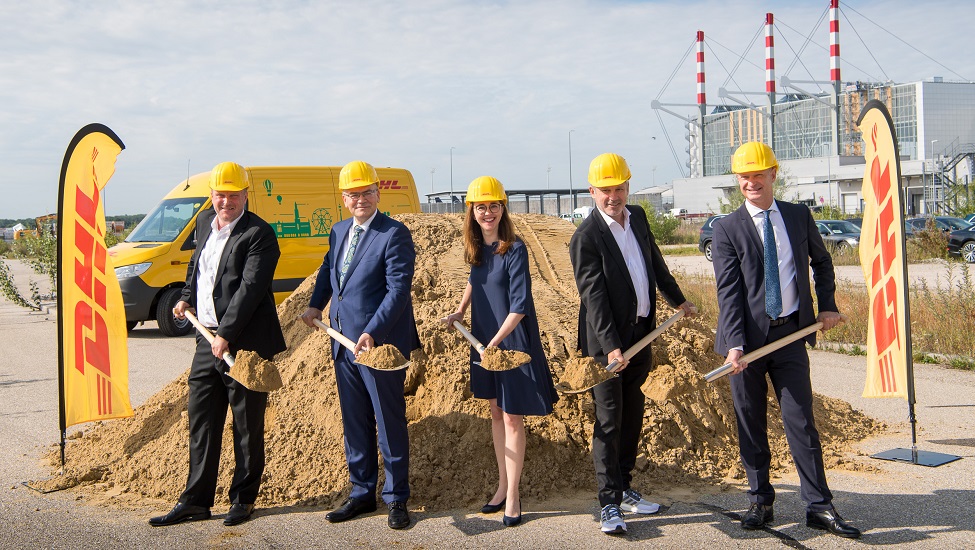 DHL Express Germany today marked the official start of construction of the new building at Munich Airport with a symbolic ground-breaking ceremony, which will be built on the area of the two parking lots P 80 and P 80 West and will cover a gross floor area of more than 11,000 square meters.

This will make the location almost seven times larger than the hall space previously rented by DHL Express in the freight center of Munich Airport. The logistics company is building and operating the new location and leasing the property from Flughafen München GmbH (FMG).

The volumes of DHL Express shipments at the Gateway Munich have risen sharply in recent years, so the expansion of the location was a logical consequence. “With the growth in import and export volumes due to the trends of digitization and globalization, the previous production area could not keep up,” says Markus Reckling, Managing Director DHL Express Germany, explaining the necessity of the 104 million euro investment project. “The construction of the new gateway at Munich Airport is the next important step in our infrastructure plan. Our customers have top priority and with the new building we offer an improved service.” Via the airside access, the aircraft parked on the apron can be reached directly from the new building. The gateway also has two so-called PUD fingers (pick-up and delivery), on which up to 65 delivery vehicles can be handled simultaneously. This leads to a time advantage for pick-up and delivery, especially for customers in the Landsberg-Ingolstadt region.

“Today is the groundbreaking ceremony for a win-win project: for DHL Express, Munich Airport, for Bavaria and for the people who want to reliably send and receive urgent freight worldwide. With the new Express Center, DHL is setting standards in logistics and sustainability. Munich Airport is a driving force for the region and for the whole of Bavaria,” said Minister of State Dr. Florian Herrmann, MdL and Head of the Bavarian State Chancellery.

When planning the building, special emphasis is placed on the use of energy-saving materials and technologies. For example, state-of-the-art LED technology is used for all lighting. In addition, a photovoltaic system will be installed that generates 100 kWpeak for the operation of building services, servers and computers. Heat is generated with heat pumps, which are supplemented by FMG’s district heating supply. In addition, 32 charging positions for electric vehicles on the PUD fingers, two charging points for the apron vehicles and charging points at the employee parking spaces are currently being planned. At the DHL Express Station in Unterschleissheim, 10 electric vehicles have recently been in use, which will soon be supplemented by further e-vehicles.

Jost Lammers, Chairman of the Management Board of Flughafen München GmbH, welcomes the ground-breaking ceremony for the new building as an “extremely important signal for the future development of Munich Airport” . Lammers continues: “We see enormous potential at Munich Airport in terms of air freight and express services. DHL Express’ strong commitment is a great vote of confidence in our air freight location. Last but not least, the Bavarian companies will benefit from the future gateway, which will find highly efficient logistics and an expanded range of flights here.”

Currently, 72 employees are employed at gateway Munich, who will move to the new building. In addition, the number of employees for commissioning will more than double. In addition, the new station will meet the safety requirements of the Transported Asset Protection Association (TAPA) and thus receive the globally recognized TAPA Class A certification as the highest security level in air transport.

The new building at Munich Airport is part of a comprehensive infrastructure program with which DHL Express is fundamentally modernizing and expanding its production facilities in Germany – including Dortmund, Neu-Ulm and Bremen. The regional service area of the Munich Gateway extends from Nuremberg in the north via Straubing in the northeast, Bad Aibling in the south to Neu-Ulm in the west. There is also a daily flight connection to the international DHL Express hub in Leipzig. Other connections from Munich are East Midlands in the UK (Monday-Thursday) and Malpensa in Italy (Friday).

DHL Express: This is an important signal in such difficult times for the air freight industry