Donahoe to replace Potter at USPS

USPS postmaster general John Potter is to retire later this year after 32 years with the company. Potter, also CEO of USPS, will step down on 3 December, to be replaced by current deputy postmaster general and COO Patrick Donahoe.

Donahoe, who was chosen to succeed Potter by USPS governors, will become the 73rd postmaster general.

During his time in charge, Potter has been credited with modernising the USPS management and creating a long-term strategic vision for the company as it battles with an ever-changing marketplace.

Potter expressed his gratitude to his staff, announcing that USPS’s accomplishments were down to “thousands of employees who dedicated themselves to meeting customer needs in a rapidly changing technological and communications environment”.

He said: “I fully appreciate their support in maintaining the tradition of trust that dates back to Benjamin Franklin and the founding of our nation.

“It is our people that define our organisation and it is their dedication and sense of purpose that drives our business.”

During his tenure, Potter’s accomplishments include: eliminating more than $20bn in costs during the last 10 years, with cumulative savings of more than $50bn; building a leaner, more flexible workforce and increasing efficiency and productivity through technology and the expansion of automation in mail processing and delivery; reducing career employment from 787,000 positions in 2001 to about 584,000 today through attrition, using strong and focused management practices; and creating a 10-year action plan that is a blueprint for necessary operational, legislative and regulatory changes to the current business model to ensure a viable Postal Service for decades to come.

Louis Giuliano, chairman of the Board of Governors, called Potter “a steadying and far-sighted leader” and praised Potter’s dedication to the Postal service “throughout a period of dynamic change in America’s use of the mail and during times of economic uncertainty”.

Speaking to Potter, Giuliano added: “The hallmark of your success was your ability to build respectful relationships with all stakeholders, customers and employees that built a trusted level of credibility. We unreservedly regard your tenure as one of great accomplishment.” 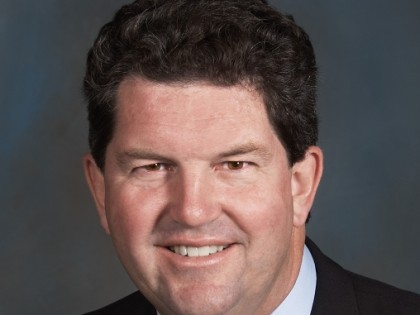 Donahoe began his career as a clerk in Pittsburgh in 1975, and in 2001, became responsible for all facets of mail operations, including processing delivery, retail, engineering, transportation and facilities.

He has served in a variety of senior management positions in operations and human resources before becoming deputy postmaster general in 2005.

Giuliano cited Donahoe’s “outstanding performance” as one of the main reasons he was appointed to the role.

“Pat and Jack have been a very effective team,” Giuliano said. “We’re very sorry to see Jack leave, but we’re grateful for the significant contributions his transformative approach to our organisation and the nation it serves. We wish him nothing but the best in the future.”

Upon accepting the position, Donahoe said his main focus is to ensure the viability of USPS.

“It’s been an honour to serve with Jack,” he said. “Our challenge going forward is to implement the ambitious plan now in place to assure the continued viability of the Postal Service in fulfilling its mission of providing reliable, self-supporting, universal mail service to our nation. While we are confronted by challenges, I am confident we will succeed.”

USPS’s Donahoe: Who is the new postmaster general? Click here for more.