The ban will cause major disruptions to UPS’s domestic and international shipping agenda.

A DfT spokesperson told Post&Parcel: “We can confirm that, following careful consideration, the Department has restricted the number of sites in the UK at which UPS Ltd are permitted to screen air cargo until it has satisfied current security requirements.

“The safety of the travelling public is paramount and our security regime is kept under constant review. For obvious security reasons we will not comment on the details,” he concluded.

In response to the decision, a UPS spokesperson said: “A Department for Transport scheduled review identified areas of concern UPS is working to address. As a result, some facilities in the UK have been temporarily taken offline, which in some cases has led to delays in the movement of packages.”

Last October, a bomb was discovered inside a printer cartridge on a UPS aircraft at East Midlands Airport. The cartridge originated from Yemen and was destined for the US. The device was not picked up by security screening, and was only discovered after a tip-off.

At the same time, a bomb was also discovered on a FedEx plane in Dubai.

UPS said it expects normal service to resume by early next week, and until then it has activated temporary contingency plans.

“In cooperation with the Department for Transport, UPS continues to assess the operation of its UK network to ensure full compliance of EU and UK security requirements, leading to a higher level of service to its customers”. 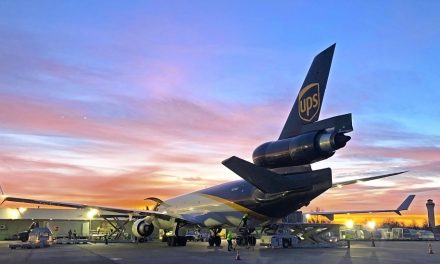