Deutsche Post has struck a deal with Ver.di, the United Services Union, on a new collective bargaining agreement for the company’s 130,000 employees in Germany. The ninth such deal between the Post and the trade union was reached ahead of schedule, the company said today, and will extend until 2015.

It covers mainly working conditions, with the issue of employee wages and salaries subject to a separate agreement between the two sides, for which negotiations begin next month for a contract to start in January 2012.

However, the deal did include a 4% cut in entry-level wages for new employees, so that new mail carriers will earn EU 10.70 an hour, instead of the current EUR 11.13.

As Deutsche Post seeks to respond to declining mail volumes, it has also been granted extra flexibility to outsource its work, particularly in the field of transport.

About 1,000 driver jobs will be phased out as a result, with expectations that the number of in-house drivers will drop from 3,600 to 2,600 by 2015. Deutsche Post has said it will be using more subcontracted transport, but not for its local mail delivery.

The union did win extended protection against lay-offs through until 2015, while an innovative system of “partial retirement” will keep older employees in full work much longer, until they reach the legal retirement age of 67.

Frank Appel, the Deutsche Post DHL chief executive, said: “The agreement makes a critically important contribution to stabilising earnings in the Mail Division at EUR 1bn over the long term. It creates the leeway that the company needs to respond to future trends in a shrinking postal market.

“As a result, we will strengthen our competitive position and secure jobs.”

Deutsche Post said as an added protection for its long-term financial stability, if the Mail Division’s earnings “significantly worsen”, Ver.di has agreed that it will re-open discussions to review the situation and come up with countermeasures. 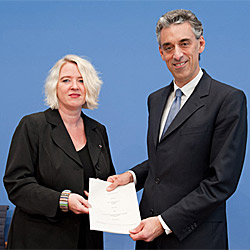 A particular “trend-setting” component of the new deal is dubbed the “Generations Pact”, through which older staff are allowed to work shorter hours during the latter stages of their career, under a “partial retirement” system.

Available up to the legal retirement age of 67, Deutsche Post said it would help “preserve their knowledge and experience for the business”, but it will also keep employees in full-time work for longer without quite the strain of a full workload.

This partial-retirement system will be funded by a special “demographic fund” being set up by Deutsche Post, along with employees’ own Working-time accounts, which are funds paid into by employees during the course of their careers, designed to cover periods when they are unable to work.

Workers on lower incomes would have proportionally higher contributions from the fund, the union said.

“We want it so that the physically-stressed, not-so well-off workers can participate in this model,” explained Ver.di deputy chairman Andrea Kocsis.

Walter Scheurle, Deutsche Post’s board member responsible for personnel, said the contract had ventured into “absolutely new territory”, which added a “novel tool” to the collective bargaining process.

“It creates new organisational approaches and offers attractive models to older employees that will allow them to remain at the company until retirement by working shorter hours,” he said.

At the other end of the age spectrum, the Pact will see Deutsche Post taking on more than 1,000 qualified trainees over the next year, while more than 1,500 part-time employees will receive a full-time contract offer at the end of this year.