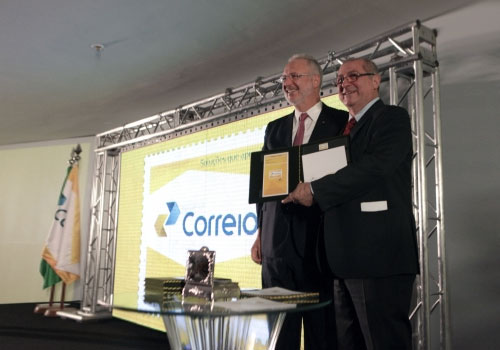 The minister said: “We want this company to continue transforming and reinvigorating, and we have numerous projects that, in these next few years, will give the company a stronger presence in the economy and in Brazilian life.”

The new brand keeps Brazil Post’s yellow and blue colours, along with the familiar “Correios” name, opting for a new font and a logo that uses arrows pointing left and right.

Brazil Post’s old brand (top) has been in use since 1991, and now gives way to a more modern look

The brand has been developed by the Porto Alegre and Sao Paulo-based agency CDA Branding & Design, with Brazil Post stating that the agency had preserved the characteristics of its branding that were already familiar to the population, with the arrows symbolizing the power of the postal service in connecting people.

The company said its new look would enhance its brand values including the trust and commitment the company has gained over its 350-year history, while highlighting this new phase of the company’s development, its local proximity, flexibility and dynamism.

Brazil Post president Wagner Pinheiro de Oliviera said the new brand was “born under the sign of modernity”, referring to the modernisation of the company that has been ongoing since 2011, as the Post aims to expand its provision of services for society, including the expansion of mobile phone services, financial services and digital mail services.

“Our goal is to continue being a company that contributes to the economic and social development of Brazil and the reduction of regional inequalities,” Pinheiro said, emphasizing the important physical presence the Post Office has in all districts of Brazil — a platform for financial inclusion, through postal banking and federal programmes.

The new branding will now be rolled out to Brazil Post’s post offices, vehicles and uniforms, as well as its website and packaging, over the next four months.