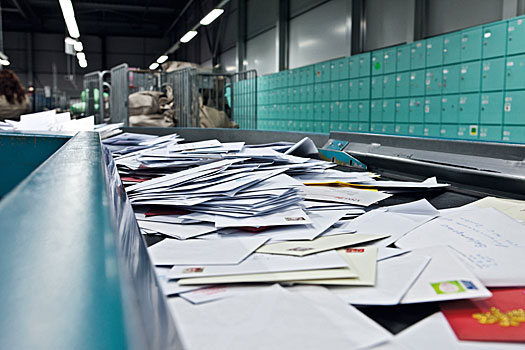 Britain’s Communication Workers Union demanded an urgent intervention from regulator Ofcom yesterday to protect the universal postal service. The union, which has been lobbying along with Royal Mail to have universal service-type standards imposed on rival TNT Post UK, said a new report from Ofcom revealing a “steep” decline in mail volumes in the UK showed the need for regulatory action.

The figures revealed that addressed mail volumes dropped by 4.5% in 2013 compared to the year before.

The 14.8bn addressed items mailed last year was 28% down from the 20.6bn mailed in 2008. Ofcom blamed the switch to electronic communications for the structural decline of the mail market.

While addressed mail volumes have been declining, addressed mail revenue has risen more than 10% since 2008, and 2.7% last year, with Royal Mail price increases pushing the figure up to £7.5bn in 2013.

The CWU, which represents 115,000 Royal Mail non-managerial staff, said it was time for Ofcom to undertake an “urgent review” of the threat to the universal service from Royal Mail’s competition in the end-to-end delivery market.

Billy Hayes, the union’s general secretary, said: “The number of letters being sent is declining year-on-year and if we want to ensure that the USO is protected then urgent regulatory intervention is needed from Ofcom.

“Failure to act will compromise Ofcom’s ability to meet its statutory duties. Other postal companies who directly deliver to customers are not held to the same standards as Royal Mail and this means competition is unfair.”

TNT Post UK began its rival service in April 2012 in West London, and has since expanded to northwest, southwest and parts of central London, as well as Manchester and Liverpool. It now delivers to 1.2m of Britain’s 29m addresses, through 23 delivery units, delivering three days per week. The firm has a new co-investor to support its expansion to additional parts of the UK.

The Dutch-owned company led a tripling of the end-to-end delivery volumes not passing through Royal Mail’s hands in 2013 compared to 2012, according to Ofcom’s newly-released data. Other small-scale local delivery firms also increased their volumes, but the 56.1m items delivered by operators other than Royal Mail nevertheless represented less than 0.4% of addressed mail volumes in 2013. By comparison, Royal Mail’s end-to-end delivery volume fell by 9.4% in 2013, to 7.5bn items.

Ofcom has so far resisted Royal Mail and the CWU’s calls to bring forward its planned 2015 review of competition in the UK mail market, stating that so far the evidence did not persuade it that TNT Post UK is proving a significant threat to Royal Mail’s universal service just yet. The regulator does have the power to impose certain conditions on Royal Mail’s rivals if it believes they are threatening the universal service, such as mail service standards or the requirement to pay into a central fund to support the universal service.

“Companies such as TNT are able to cherry pick the low cost, profitable areas for delivery. This reduces the revenues needed to sustain the universal service,” he said.

“The figures released today mean that Ofcom can no longer bury its head in the sand. If we want to protect the USO then it is critical action is taken now.”

The new figures from Ofcom also reveal the proportion of mail that goes through the downstream access system — mail that is collected and sorted by Royal Mail’s rivals before being passed to Royal Mail for final delivery.

If the trend continues, Royal Mail will be collecting less than half of UK mail from next year onwards, for the first time in its history.

This suggests Royal Mail has more competition on its hands than just TNT Post UK. However, the structure of downstream access pricing means Royal Mail keeps most of the overall revenue for making the final delivery, so downstream access poses less of a threat to the company’s finances than a company that provides the final delivery as well, such as TNT.

Ofcom’s report found that among consumers, DHL was the most likely alternative used instead of Royal Mail for post, since it has a presence in high street retail outlets including Ryman, Staples and WH Smith. FedEx and City Link were the next most used services, due to their presence on parcel aggregation websites.