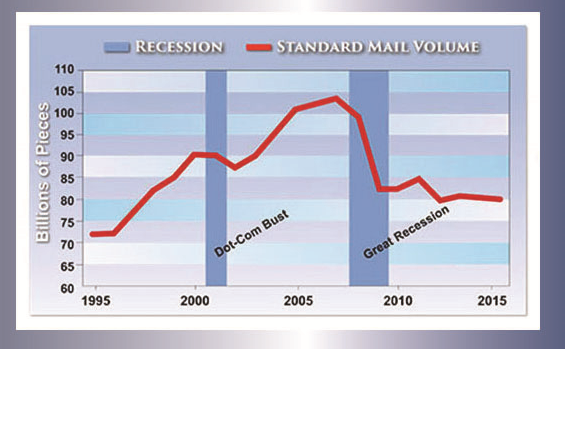 The US Postal Service (USPS) Office of Inspector General (OIG) has published a White Paper which examines why advertising mail revenue is failing to track with GDP as it had in the past. The White Paper, entitled Advertising Mail: Past and Present, looking at ad mail revenues and trends since 1980 in the face of significant societal and economic changes, as well as the changing dynamics of the overall ad market itself.

In its official statement about the White Paper, the OIG noted: “Some decline in the size of ad mail’s market share relates to macroeconomic factors such as lower median household income, which lowers potential consumer spending. Other factors include lower ad prices driven by digital technology and the growth of non traditional advertising such as social media, which is virtually free.

“Finally, advertising itself may be more effective today than in the past because of improved analytics. Ironically, this phenomenon parallels the computer technology boom in the 1980s which, along with worksharing, helped spur the initial growth of ad mail to 9.8 percent per year between 1980 and 1988. Computer technology allowed fine-tuning of mailing lists and more sophisticated targeting than had been possible in prior years.”

The report outlines strategies for dealing with admail and also includes a study from postal econometrics experts RCF Economics and Financial Consulting.

USPS: Every team in every facility across the country is focused on Election Mail

DeJoy: as of last week, service improved across all major mail and package categories

DeJoy: We urgently require the PRC to establish a more rational regulatory system