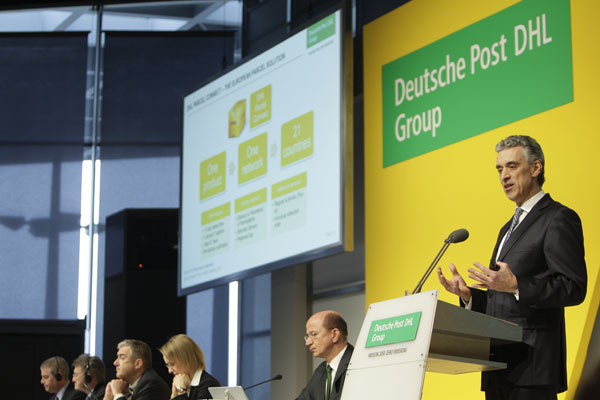 Deutsche Post DHL Group has reported “record earnings” for 2016, with operating profit up 45% to €3.5bn. In a statement sent to Post&Parcel today (8 March), the Group said its fourth-quarter EBIT of €1.111bn was “the best quarterly result in company history” – and it had already posted record figures in the preceding quarters.

Although the Group saw a 45% increase in EBIT, revenue was down 3.2% at €57.3bn. However, Deutsche Post said that when adjustments are made for negative currency effects, lower fuel surcharges due to falling oil prices, and other factors, the group revenue actually rose by 2.8%.

Revenue in the PeP division grew by 4.1% to €16.8bn. Adjusted for currency effects, revenue increased by 4.4% compared with the prior year.

“In addition to the postage stamp price increase implemented at the beginning of the year, the division’s good performance was driven above all by volume and revenue increases in the eCommerce – Parcel business unit,” said Deutsche Post DHL.

“€7.1bn of the division’s revenue was generated by eCommerce – Parcel, which continued to see strong growth of 11.2% over the prior-year period. The increase was based on revenue gains of 10.1% for Parcel Germany, 15.1% for Parcel Europe and 12.5% for eCommerce. In Germany alone, the PeP division delivered more than 1.2 billion parcels in 2016 – an increase of 9.3% and a new record,” according to the Deutsche Post DHL statement.

“Last year, the company expanded its parcel and e-commerce activities to markets in the U.K., France, Hungary, Slovenia, Scandinavia, Finland and the Baltic states, and is now active in 21 European countries. In addition, e-commerce activities were stepped up outside of Europe, in part through logistics centers in the United States, Mexico and India and through last mile delivery in Thailand.

“Revenue in the Post business unit was roughly level year-on-year at €9.74bn (2015: €9.78bn). The increase in letter postage prices at the beginning of the year almost fully offset the negative impact of the structural volume decline in the Mail Communication and Dialogue Marketing segments.

“The positive business performance at PeP is also reflected in operating profit. The division increased EBIT by 30.8% to more than EUR 1.4 billion. It should be noted, however, that the prior-year figure contained one-off charges associated in particular with the postal strike in Germany. Even after adjusting for this factor, however, the increase in earnings was substantial. Earnings were primarily fueled by persistent growth in the eCommerce and Parcel businesses, the increase in postage stamp prices and disciplined cost management. Investments in the international parcel business held back an even greater increase in EBIT.”

The Express division’s revenue increased by 2.7% in 2016 to €14.0bn – even though the growth was held back to some extent by negative currency effects and lower fuel surcharges. If these effects are excluded, the company said, the revenue increase would be 6.3%. The success of DHL Express was again mainly attributable to strong growth in time-definite international (TDI) shipments, which saw a volume increase of 7.6%. The division’s EBIT increased by 11.3% to EUR 1.5 billion.

Frank Appel, CEO of Deutsche Post DHL Group, commented: “2016 was a very successful year for us. The company has never before achieved higher earnings in its current structure. “We also invested substantially in all four divisions and made strong progress in the implementation of our Strategy 2020. Thanks to our targeted approach to e-commerce, the entire Group is benefiting increasingly from the dynamic international development in this segment. “We are in an excellent position to maintain our profitable growth.”The Group expects to see further improvements  in earnings in 2016, and confirmed its 2020 targets.