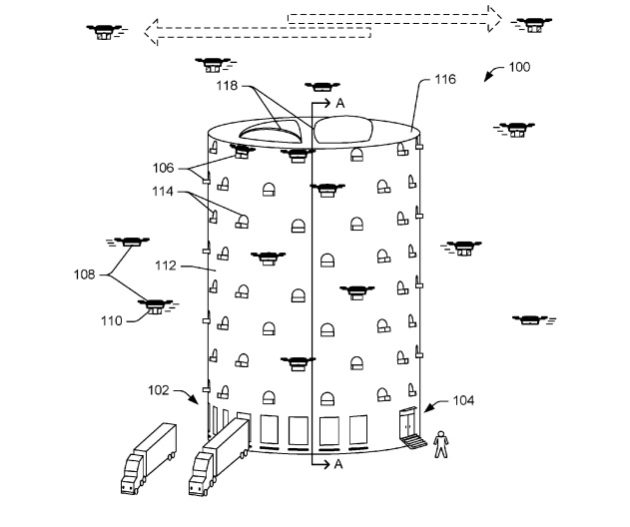 Amazon has been granted yet another patent for a futuristic delivery drone concept: this one is for a “multi-level fulfilment centre” which looks like a giant drone hive. The company filed its patent with the US Patent & Trademark Office (USPTO) in December 2015 and the patent was published yesterday (22 June).

Many in the delivery industry appear to be taking the view that drones could be appropriate for the “niche” market of delivery in rural areas, where road access can difficult and there is less risk of the drones colliding with people.

However, Amazon said in its patent filing that the multi-level (ML) fulfilment centre could be used in “an urban setting, such as a densely populated area” – and it went on to argue that the drone hive could be particularly suited for tackling the inner city delivery challenge.

“Fulfillment centers are typically large-volume single-floor warehouse buildings used to temporarily store items prior to shipment to customers. Often, due to their large footprint, these buildings are located on the outskirts of cities where space is available to accommodate these large buildings. These locations are not convenience for deliveries into cities where an ever-increasing number of people live. Thus, there is a growing need and desire to locate fulfillment centers within cities, such as in downtown districts and densely populated parts of the cities,” according to the Amazon patent.