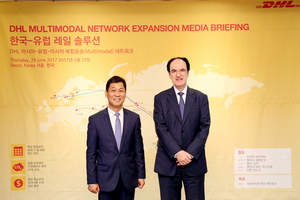 DHL Global Forwarding has added South Korea to its Asia-Europe multimodal network. As part of the extension, new ferry services link ports in Incheon and Busan to a range of major Chinese ports including Shanghai, Taicang and Lianyungang.

South Korean shipments will then travel via truck to major inland hubs in cities including Chengdu, Hefei, Suzhou and Xi’an for subsequent transport to Europe on DHL’s rail services.

South Korean businesses will also gain access to DHL’s Flexigateway service, which selects the optimal rail route for shipments based on available capacity and route speed.