Newly-listed Singapore Post has posted a 7.2 percent rise in full-year net profit to S$108.7 million and said it expects the business outlook to remain steady, although SARS and the weak economy could cause companies to curb promotional activity.

The rise came despite a 2.1 percent fall in operating revenue to S$373 million for the year to March.

SingPost, the recently-listed postal services arm of Singapore Telecommunications, said the economy is unlikely to “improve significantly in the near-term and the economic impact of SARS may continue.”

Still, it expects its performance going forward “to remain generally stable,” barring any further deterioration in the economic environment.

The company also recommended a full-year gross dividend of 5.4 cents a share, or a total of S$80 million.

The company said profit was boosted by its share of earnings from associates and joint ventures, which rose to S$14 million from S$4.8 million, largely from its Spring joint venture.

Total mail traffic was flat in the year at 834 million items.

SingPost also said it still hasn’t heard from the Infocomm Development Authority of Singapore regarding its application from last August to raise basic postal rates. 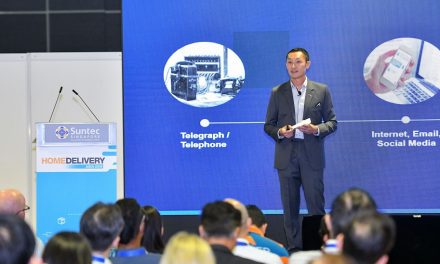 SingPost: delivering medicine to around 300 recipients every day