We are programmed to receive… 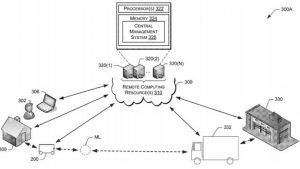 There has been a lot of talk about parcel delivery robots… but now Amazon has come up with an idea for a parcel receiving gizmo.

Amazon has been granted a patent by the US Patent and Trademark Office for an autonomous device which can be used to pick up parcels from delivery trucks and then bring them back to their owners’ homes.

In the patent – which was filed on 25 July 2016 and published by the USPTO last Thursday (25 January) – Amazon said that the “autonomous ground vehicle” (AGV) may also “be equipped to open and close access barriers (e.g., front doors, garage doors, etc.)”.

The patent also paints a rather quaint picture where the delivery truck arrives on the street, and then a stream of AGVs come out of their owners’ house, form an orderly queue to collect their parcels before scurrying back home.

Amazon added that “the AGVs may be owned by individual users and/or may service a group of users in a given area”.