About this white paper

This white paper has been created off the back of the Post&Parcel Live: Futuristic Logistics Seminar, a one day event that took place in London on 15th May 2018. We asked experts where they felt last mile technology was heading and published their thoughts in this white paper.

The Post&Parcel Live Seminars are intimate, one-day content and discussion led events for professionals involved in the post and parcel industry. The seminars feature keynote speeches from prominent experts, case studies from successful operators and open discussions with the audience and speakers. Find out more at www.postandparcel.info/live/

We canvassed opinion from experts at the Post&Parcel Live: Futuristic Logistics Seminar for insights on the direction of future technology in the last mile. Download the white paper for free and get insights from Bosch, Cambridge Consultants, EO Charging, the London Assembly and more… 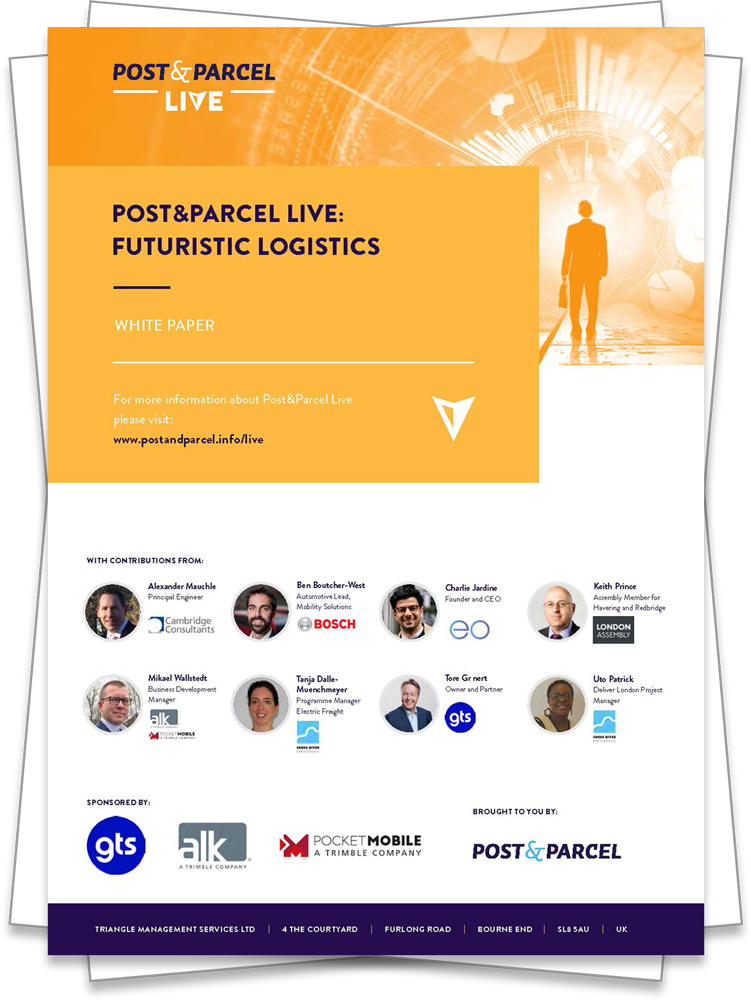 Introduction to the white paper

London 2040: Will the skies be heavy with the swarm of drones, the pavements a moving mosaic of delivery robots and the roads a 3D thoroughfare of autonomous flying taxis and CargoPods, silently and faultlessly ferrying their occupants across a grid of horizontal and vertical lanes?

Will this be a cityscape – to borrow a phrase from General Motors – of “zero crashes, zero emissions and zero congestion”?

A fully electric vision where all vehicles are self-driven and perfectly driven, expertly predicting and avoiding any possible collisions and always picking the perfect route to save time and energy.

A city without traffic jams or accidents, where the streets are safe and clear and deliveries always on time.

Could we really achieve all of this in 20 years – or even 50 years? The short answer is no. The longer answer is that at least some of this is achievable, and we won’t have to wait decades to see it. Indeed, some of these “futuristic logistics” solutions have already made an appearance on the streets of London.

In Greenwich, for example, the GATEway Project and Ocado have teamed up to trial the use of an autonomous “CargoPod” to deliver groceries to more than a hundred homes. And in the same borough, Starship Technologies demonstrated how its delivery robots can navigate the pavements to deliver goods to online shoppers. Autonomous developments are also taking place in many other cities across the globe.

As for delivery drones, they have already taken flight in urban environments; the concept certainly excites a lot of media interest. However, we suspect that drones may prove most adept at operating in rural areas – especially in places where roads are scarce or impassable. In the cityscape, drones could find a niche transporting high-value or urgently-needed items such as medical supplies and they will probably flit between roof-top drone-pads so they don’t have to interact with pedestrians.

Drones and droids may be future features of the urban delivery model – but electric vehicles will definitely play a starring role. One of the key virtues of the electric vehicle is its scalability. Large electric or clean-fuel trucks can make the long-haul run into the city depots; then electric vans, trikes and bikes can complete the last-mile leg.

In a way, it seems strange to include electric vehicles in a “futuristic” survey because they have been around for a very long time. However, new advances in battery and charging technology are helping to re-invent these zero-emission workhorses as a versatile delivery solution. So, we are going back to future – but our future electric vehicles will come fully loaded with autonomy, connectivity and optimisation software that could make failed or late deliveries a thing of the past.

The Post&Parcel Live Seminars are intimate, one-day content and discussion led events for professionals involved in the post and parcel industry. The seminars feature keynote presentations from prominent experts, case studies from successful operators and open discussions with the audience and speakers.