Kinek, the network of independent parcel delivery points, has been achieving rapid growth across North America, and now has eyes on establishing a major presence overseas. A Canadian software company turned logistics facilitator, Kinek now co-ordinates a network of 1,300 KinekPoints, mostly in the US, where consumers can receive parcels as an alternative to home or work addresses.

Consumers register with Kinek and are given a Kinek ID, and can then put the address of their local Kinek Point as their delivery point when buying goods online. They can then pick up their parcels more conveniently while at work or on the way home, rather than taking a day off to receive a purchase.

Founded in 2001, Saint John-based Kinek launched its service in the US in 2009 and has since been attracting brick-and-mortar retailers to host Kinek Points at a phenomenal pace, enticing them with the prospect of increased foot-flow.

This month saw Do It Best, Med-Fast and StorageMart as the latest retailers to provide KinekPoints in their locations.

CEO Kerry McLellan told Post&Parcel his company has achieved the kind of network growth in the last two years that Mail Boxes Etc needed a decade to achieve.

He said from next year, his company is looking to take its model outside North America.

“Right now, the bulk of US e-tailers don’t ship to Canada, and virtually none ship to developing countries. But if they had a secure point that they could ship to, then this dramatically increases their potential addressable market, and therefore revenue base,” said McLellan.

“We think our international expansion is going to happen very quickly, with the right partnerships.”

The Kinek network is already effectively keyed into cross-border commerce with Canada. It has KinekPoints at 25 major border crossings, allowing the 70% of Canadians who live within an hour of the border to make use of US online retail websites that do not ship abroad because of prohibitive cross-border costs.

McLellan said that with the right adjustments to the Kinek business model, expanding into developing countries could potentially allow retailers there to leapfrog some of the traditional stages of development seen among their western counterparts.

“We’re going to allow them to skip generations of retail development, because internet penetration is very high in these countries,” he said.

“The traditional model around retail development is that you build bigger and bigger stores to offer better prices and selection – but the online world allows you the ultimate in selection and prices, and if you can address the logistical issues, you don’t need to build that infrastructure.”

Benefits in the shipping chain 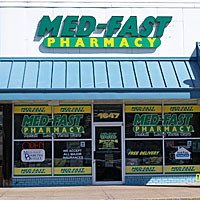 The Kinek CEO says his business model is successful because it is carrier-agnostic and online retailer agnostic. The company promises benefits for all stakeholders in the ecommerce chain, including online retailers, carriers, brick-and-mortar retailers and consumers.

KinekPoint operators benefit since they can attract additional foot traffic, and can also charge consumers a pick-up fee, although they may choose not to charge in order to encourage more people to pick up parcels at their stores.

Some KinekPoints are currently receiving upwards of 300 parcels a week, although McLellan is guarded on revealing overall company-wide volumes.

Within its current US network, Kinek already provides access to the major US carriers’ tracking systems via its website, and when a parcel arrives at a Kinek Point, an alert then goes out to the recipient that their package has arrived.

McLellan said that the next step, which should happen by mid-2012, will be for Kinek to provide its Kinek Point operators with data on the general types of products its visitors are buying online.

This could potentially help those Kinek Point operators to improve the already high conversion rates for those picking up packages to make additional purchases in store.

“So for example,” he explains, “a hardware store in a rural area might find that 35% of the parcels they receive are automotive goods. If we tell them that, they may want to get a Western Auto franchise to fill in that part of their product mix.”

McLellan says carriers were initially skeptical of the Kinek model, but have been finding that the network can mean reducing missed and repeat deliveries, cutting their transport costs when making a delivery.

“You’ve got a huge addressable market over there,” he says, “and you’ve got well-developed e-tailers over here in America that can’t easily get to that addressable market. If you can get infrastructure to bridge that gap, the benefit for all parties is huge.”

eSAL to help US businesses sell and deliver products into China