From Uruguay to the Universal Postal Union?

James Cartledge speaks to Serrana Bassini, Secretary General of the Postal Union of the Americas, Spain and Portugal, who is hoping to be elected the next head of the UPU. One of the tasks for delegates at the 25th Congress of the Universal Postal Union, which began in Doha, Qatar, yesterday, will be to choose a new leadership team for the UPU’s International Bureau.

The election to decide between the two candidates for director-general, along with deputy general, will be held in Doha on 10th October.

After fifteen years rising through the ranks at Uruguayan Post, and a similar length of time in senior roles at the Postal Union of the Americas, Spain and Portugal (PUASP), Uruguay is putting forward Dr Serrana Bassini Casco as a candidate to take on the role of Director General of the UPU from 2013 to 2017.

Bassini has spent her entire professional career in the postal sector. A lawyer and public notary by training, with degrees up to doctorate level in law and social sciences from the University of the Oriental Republic of Uruguay, she started working for Uruguayan Post while still a student in 1980 and has never looked back.

At Uruguayan Post, she contributed in many different areas, from her first position dealing directly with customers through to the post’s legal affairs and international affairs divisions, both of which she ultimately led as director before her country put her forward to become Deputy Secretary General at PUASP in 1996.

During her time at Uruguayan Post, she helped to lead two restructuring phases of the organisation, and also contributed to the next generation of postal officials, passing on her legal and international affairs expertise by teaching at the postal school. And, even now, she says she works so closely with the Uruguayan Post that she still feels like a part of that organisation.

Bassini is very proud and honoured that her region selected her as Deputy and then Secretary General of its postal union, and having supported 26 members in such a diverse region of the world, she feels it has prepared her well for contending with the similarly diverse issues within the Universal Postal Union itself.

“It’s almost a smaller picture of the rest of the world,” she says of her region, noting the very different characteristics of the countries under the PUASP mantle from developed industrial nations through to smaller nations and islands. 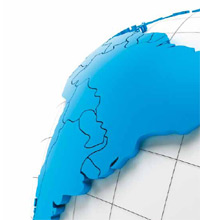 Experience from the diverse Americas region can be applied to the world as a whole, Bassini believes

“After supporting this region for fifteen years, I believe it has similar situations to the rest of the world, although perhaps in a different language,” says Bassini, herself a speaker of Spanish, English and French.

Standards for the future

Talking to Serrana Bassini about the huge challenges that the international postal community faces, one of her key messages is that to survive in the modern postal market, postal operators need to work closely together.

In an era of increasing globalisation, competition and liberalisation, members of the UPU need to work with each other to create a real international network. Bassini believes that postal operators have a unique ability to bring together the physical, digital and financial communications of the world within a single network, and that the UPU can be at the heart of that process.

She believes a central platform in forming a strong global network must be the creation of international standards for its differing components, in order to ensure complete interoperability between UPU members: standards in areas such as electronic communications and other new areas of postal business.

”The UPU has to play a strong role in the standards for the future, because we need to form a common platform for new technologies,” she says.

In the new postal era, work must also be done to encourage national regulators around the world to open the doors for postal operators to run new services, and to build on their unique position in society and the trustworthiness of their brands.

It is something Bassini is already doing within the PUASP, engaging with Latin American governments and regulators to allow new products and services to be offered by regulated posts.

“In our region, we have a serious problem with regulation. In the majority of the countries, the market started out as liberalised and then later the governments started to regulate, but they did not care about the obligation of the universal service,” she says.

Through the PUASP, Bassini has been urging governments to open up regulation to allow new products and services, and to permit postal operators to grow beyond their traditional mail base.