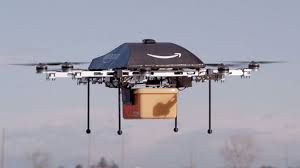 ParcelHero has put the case that Amazon is working with the UK government for its new drone delivery trials because the US “backed away” from legalising trials that would involve using drones beyond the operator’s line of sight. ParcelHero’s Head of Consumer Research, David Jinks, commented: “Last year, the then Transport Minister Robert Goodwill declared: ‘Amazon came to see me to ask about starting drone trials in the UK because regulations in the US were too restrictive. So much for the land of the free.’”

Jinks continued: “The UK Government was keen to capitalise on America’s hesitation in order to secure further investment in Amazon’s Cambridge based R&D team. Now a cross-Government team – supported by the UK Civil Aviation Authority (CAA) – has pushed through new legislation allowing radical new trials. The new permissions allow beyond line-of-sight operations in rural and suburban areas, and flights where one person operates multiple highly-automated drones. Previously such flights would have been unthinkable and seen Amazon’s plans grounded.

“The US Government and its Federal Aviation Authority (FAA) were very wary about authorising permission for such tests, which hugely frustrated Amazon executives. But the UK Government has adopted a far more ‘can do’ approach in order to secure investment.”

As Post&Parcel pointed out in our news story this morning about the Amazon trials, the US FAA published its first operational rules for the commercial use of drones last month and – to the disappointment of delivery drone players like Amazon and Flirtey – it stuck to the “line of sight” policy. The fact that UK authorities were willing to clear this hurdle would have been a welcome change for Amazon.

Jinks commented: “The UK Government and the CAA’s willingness to change the rules to allow beyond line-of-sight flights and one-person operation of multiple drones mean previously illegal flights are now allowed in a controlled area. Amazon’s Vice President of Global Innovation Policy and Communications, Paul Misener, said today ‘We’ve been investing in Prime Air research and development here for quite some time,’ and these permissions are Amazon’s reward for that investment.”