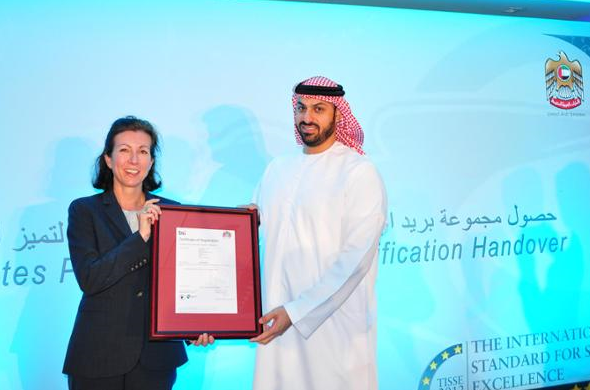 EPG’s Acting CEO Abdulla Mohammed Alashram said: “It is very satisfying to know that we are the first postal organization in the world to achieve this certification, as nothing is more valuable than getting an international endorsement through a prestigious certification label such as TISSE. We believe these results will pave the way for EPG to fully achieve the ‘Global Star Rating System’ standards set by the UAE Government.”

EPG began implementing the standards required by TISSE in May this year. The assessment was conducted by a team from BSI Middle East and Africa in key departments at the head office, and the Central Post Offices of Dubai, Abu Dhabi and Sharjah.

The Certification Assessment Report was released by the British Standards Institution (BSI) following assessments held during the month of October, 2016, under the 5 P’s laid down by TISSE: Policies, Products/Services, Premises, Processes and People, along with measurement of performance and results.