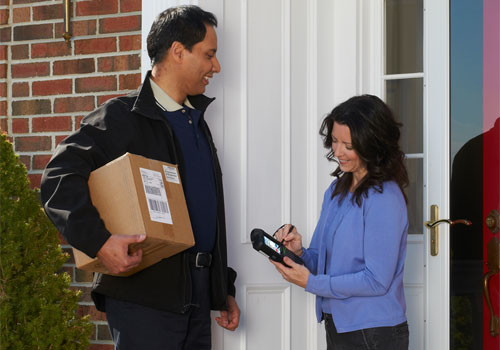 Honeywell Survey Finds Four-in-10 Shoppers Willing to Pay For ‘Perfect Delivery’: Where and When They Choose

More and more UK consumers are shopping on-line and they increasingly expect retailers to provide more convenient delivery options to accommodate their busy schedules. In fact, the three-hour delivery window has now become a standard expectation amongst the majority of UK shoppers, according to new research* carried out by Ipsos Research on behalf of Honeywell (HON:NYSE).

Almost all of the 800 adults surveyed (99%) expected a delivery to arrive within one week of ordering, but the majority of respondents (53%) now expect the estimated time of delivery to be precise within three hours or less, and 40% of consumers said they would be willing to pay extra for the ‘perfect delivery’, in which they designate exactly where and when their parcel will be delivered.

“It is crucial for online retailers to keep up with the fast-paced lives of their customers, which is why mobile technology plays a vital role for e-commerce,” said Jeff Taylor, director of Honeywell’s Transport and Logistics business in Europe, Middle East, Africa and India.  “From the warehouse to delivery to post-sale satisfaction, both retailers and couriers have to work closely together to ensure a swift delivery and a positive shopping experience.”

“The state of e-commerce in the UK is on a hugely positive trajectory, but there is a clear indication that the modern day consumer is increasingly expectant of greater flexibility in product delivery,” said Mike Leyland, CIO, Hermes Europe and UK. “Firms need to be able to keep up with the 24/7 convenience of the online model or risk losing business to those that do. This is why innovative technology is going to play an even bigger role in the future of e-commerce.”

The majority of customers (57%) declared that current delivery options offered by retailers are not satisfactory, and more than half of respondents (51%) say it is often the case that ‘the parcel delivery reaches their home address when they are not at home and/or misses the appointment time’.

For orders requiring collection of the product, consumers expect travel distance to be short. Only one in ten said that they would be willing to journey five miles to pick up their item; whilst four in ten (39%) will only go as far as their nearest shop for collection.

While consumers are largely in agreement that on-line shopping will only grow — more than nine out of 10 consumers (94%) stated that they have ordered something online within the past three months, and nearly all (99%) expect to be conducting some form of online shopping over the next five years, — their views differ on the options for delivery that will be available to them:

The message for retailers is clear:  companies that are unwilling to adhere to the consumer’s demands will face the consequences; with almost half (48%) of UK shoppers admitting that they have abandoned their online shopping baskets owing to poor delivery options.

Since the vast majority (91%) of consumers check delivery options prior to check out, this shows a need for businesses to provide shoppers with convenient delivery options, or risk being left behind as online shopping takes increasing precedence in the lives of consumers.

*Survey Methodology:  These findings reflect a poll conducted in the United Kingdom June 26 – June 30, 2014, by global research company Ipsos on behalf of Honeywell. The survey was fielded using the Ipsos Online Panel system. A sample of 800 adults aged 16-64 in the United Kingdom completed the survey online. The sample was weighted to reflect the general population based on the latest available census data. The precision of Ipsos online polls are calculated using a credibility interval with a poll of 1,000 accurate to +/- 4.0 percentage points. 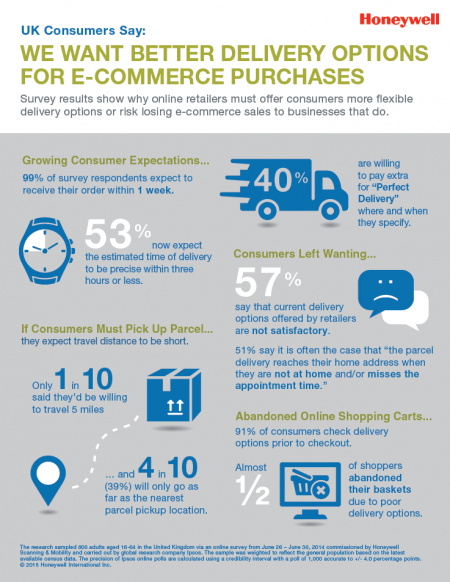