Drones on show in Singapore 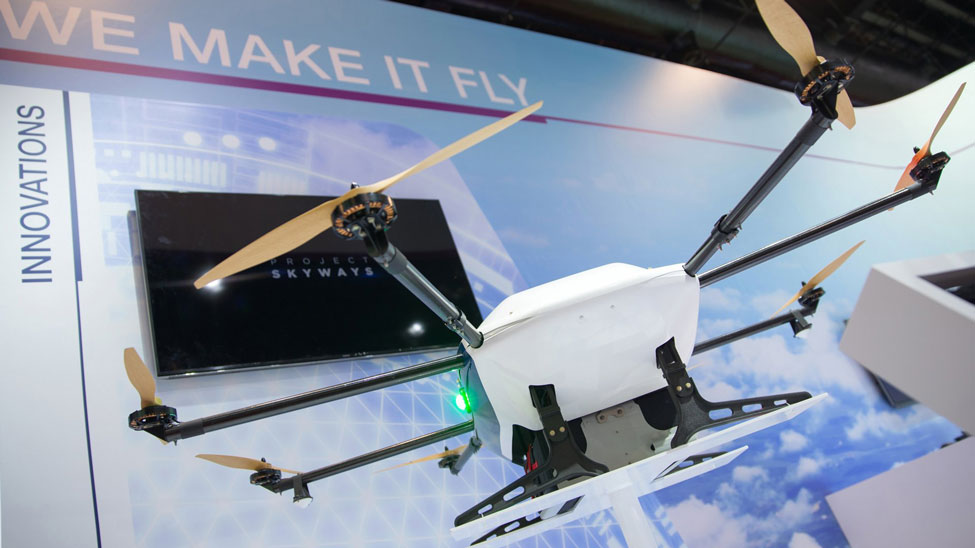 The Civil Aviation Authority of Singapore (CAAS) and Airbus are promoting the Skyways drone delivery project at the Singapore Airshow – and CAAS has also joined with the Ministry of Transport (MOT) to announce that the one-north business park has been designated as a “drone estate”.

In its official statement regarding the one-north project, CAAS said: “Master-planned and developed by JTC, one-north is a 200ha business park that offers an ideal location to test varying urban environment complexities for UAS operations. These comprise various typologies ranging from high-rise to low-rise buildings, as well as public spaces like parks. one-north is also a fertile ground for research and innovation, where a vibrant community of start-ups, technology owners and research institutions test-bed their latest urban solutions.

“Under the drone estate initiative, approved operators and research users can carry out their trials and operations at one-north without compromising safety and security. For a start, CAAS will be working with companies which intend to conduct trials and other development activities in the drone estate for a variety of potential use cases.”

Meanwhile, the Skyways drone programme (which is connect to the one-north initiative) appears to be gathering momentum.

As previously reported by Post&Parcel, Singapore Post (SingPost) signed up in April 2017 as the logistics partner for the Skyways project, which is trialing small parcel delivery via autonomous drones to designated stations on the campus of the National University of Singapore (NUS).

In a statement issued today (7 February), Airbus explained the modus operandi: “Incoming packages are first loaded automatically onto the drone via a robotic arm at designated parcel stations. Drones launch and fly autonomously, delivering the package to delivery stations on the campus, where it is then stored in lockers for campus dwellers to retrieve it.

The systems architecture for the Skyways drones was developed in France and then finalized and built in Singapore.

“We will have five or six drones flying in the initial trial phase this year and we expect it to run several months to be able to collect relevant data and insights,” said design office head at Airbus Helicopters and Skyways project lead Leo Jeoh.

If successful, the Skyways team intends to extend the scope of initial test phase to deliver packages to ships anchored in the Port of Singapore. Later applications could include delivering higher-value goods or medical supplies to disaster-hit regions, where roads may be impassable (an application which other drone makers already exploring in parts of Africa).

Jeoh added: ““We see Skyways as an important stepping stone in paving the way for air mobility in urban settings. It’s an awesome opportunity for Airbus to run a first live autonomous and electric urban air mobility exploration. We are essentially opening up Pandora’s box to determine what it will take for unmanned vehicles to fly safely in cities. All regulatory issues must be properly addressed before we will see either drones or larger passenger electric vertical take-off and landing vehicles (eVTOLs) such as CityAirbus flying above our heads.

“I am convinced that Airbus will be pivotal in the shift from ground to air transportation in urban spaces.

“Through our strong relationship with CAAS, the NUS and SingPost, we will be able to run a meaningful trial that allows us to explore and develop regulations, technologies, and operational requirements to safely operate unmanned vehicles in urban environments while gaining valuable insight from campus dwellers on how they feel about the tech flying around.”