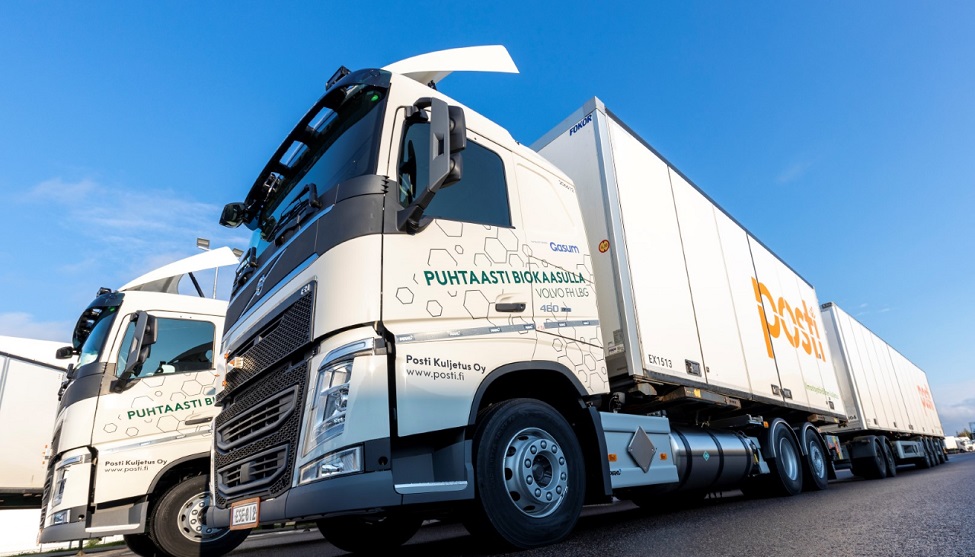 Gasum and Posti are working together to promote clean transport. Posti is investing in biogas-powered trucks as part of its efforts to a clear reduction in its transport emissions. At the same time, this will create Finland’s largest fleet of gas-powered heavy-duty transport. Gasum’s gas filling stations in conjunction with Posti’s terminals and on long-haul routes ensure smooth transports.

Posti Freight Services has acquired ten new liquefied biogas (LBG) trucks. The investment is part of Posti’s aim to achieve carbon-neutrality in its own operations by 2030. Partnering with energy company Gasum will significantly promote a reduction in transport emissions.

“Choosing renewable biogas as a fuel in long-haul transport has made Posti a pacesetter in logistics. Pilot tests have now progressed to extensive use of low emission fuel solutions that have been found to work. Use of biogas in transport is an effective way to combat climate change and can also reduce the greenhouse gas emissions during the lifecycle of the fuel by up to 90%. Along with biogas, liquefied natural gas (LNG) is also on the solutions list when seeking to cut logistics emissions. A fleet running on liquefied gas makes it possible to flexibly switch from natural gas to biogas without needing to replace the fleet,” says Juha-Matti Koskinen, Sales Manager, Traffic, Gasum.

The first biogas-power trucks have already been deployed and the full fleet will be in use by the end of the year. Together, biogas-powered trucks will reduce carbon dioxide emissions originating in Posti’s transports by 1,620 tonnes a year, which is the amount produced by driving a car almost 8.6 million kilometers, or 215 times around the globe.

“As a pioneer in the field, we play an important role in developing and implementing energy-efficient and sustainable transport solutions. For a long time, we have developed our operations to reduce the emissions from our freight transports. In addition to gas-powered vehicles and alternative fuels, our environmental measures include target-oriented route planning, a method that develops quickly thanks to new technologies and procedures. We reduce our environmental impact also by actively monitoring driving habits and updating our service level agreements,” says Antti Wikström, Vice President of Posti’s Freight Services.