Member countries elected Marjan Osvald to the post of Deputy Director General of the UPU during the 27th Universal Postal Congress.

In the vote for the UPU Deputy Director General, Marjan Osvald of Slovenia was elected on the second round with 86 votes.

Commenting on his election in a statement after the election, Mr Osvald said, “I am so happy to be here and so very proud.” 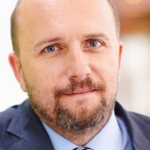 Mr. Osvald is an accomplished executive with 24 years of progressive experience in international postal operations, strategy and sales. Currently a Senior Adviser to the Executive Management of the Post of Slovenia, responsible for international relations and organizations, Mr. Osvald was promoted to this position following 12 years of service as International Mail Director.

Throughout his career, Mr. Osvald has been deeply involved in international postal business. He is an active member of the PostEurop Management Board for the third consecutive mandate and a long-standing member of various Steering Committees within the International Post Corporation (IPC). He also participated in the establishment of the Postal Union for the Mediterranean (PUMed), and in 2019, was elected Member of the PUMed Board of Directors. Domestically, Mr. Osvald is the Chairman of the Slovenian National Stamp Advisory Committee and a Lecturer in International Postal Operations at the Vocational College of Postal Services and Telecommunications in Ljubljana. He was also the Chairman of the supervisory board of Feniksšped (Freight and Forwarding Company) in 2011‒2018.

Mr. Osvald has actively participated in the work of the UPU, including UPU Congresses in 1999, 2004, 2008, 2012 and 2018. He was a UPU National Quality of Service Coordinator with two awarded projects, one of them for a new concept of postal customs procedures backed up by a software solution that was awarded the 2014 Postal Technology Award for the Digital Innovation of the Year.