USPS  has commemorated legislation that leveled the playing field, literally, for women and girls nationwide with the dedication of four Title IX Forever stamps. 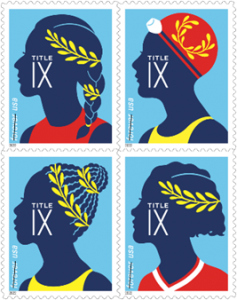 Title IX was enacted by Congress and signed into law by President Richard Nixon on June 23, 1972. The act prohibits sex discrimination in any educational program or activity receiving any type of federal financial aid.

Title IX states: No person in the United States shall, on the basis of sex, be excluded from participation in, be denied the benefits of, or be subjected to discrimination under any education program or activity receiving Federal financial assistance.

“Title IX created pathways for enriching women’s programs, allowing for a broader range of competitive offerings, more robust physical education regimens and equivalent resources,” said Amber McReynolds, member of the USPS Board of Governors and dedicating official during the ceremony last week at the U.S. Department of Education in Washington, DC. “I can personally attest to the positive impacts of Title IX. I have seen my daughter excel with the increased opportunities available to her. I am thankful she can grow up knowing these rights are not only deserved but expected.”

Four different stamps feature dark blue silhouettes of one of four female athletes: a runner, a swimmer, a gymnast, and a soccer player. Yellow laurel branches, symbolic of victory, rest in their hair and on the swimmer’s cap. The four Forever stamps are in a pane of 20. The art director was Derry Noyes.

Adopted as part of the Education Amendments of 1972, Title IX is a civil rights law prohibiting discrimination based on sex in any educational program or activity receiving federal financial assistance. In the 50 years since its passage, Title IX has been applied widely at elementary, secondary and post-secondary institutions. The law covers a wide range of programs and resources. Most visibly, Title IX has created pathways for enriching women’s athletics programs, allowing for a wider range of competitive sports offerings, more robust physical education regimens and equal spaces to play. Additionally, Title IX prohibits sexual harassment, sexual assault, dating violence, domestic violence and stalking on school campuses or within school programs or activities. Fifty years later, Title IX is still evolving. The law has affected generations of young people in the United States, and the work to provide protections for even more in the future continues.