Google reveals what it would do running the Postal Service

The postal sector asked the question yesterday, “What Would Google Do?” if it was running the struggling US Postal Service. And Google came back with a reply. Yesterday saw a fascinating event held in Arlington, Virginia, in which the postal sector grilled various internet and digital gurus to grasp some idea of how the physical mail industry should be responding to the digital revolution.

Among the respected experts sharing their views at the PostalVision2020 conference was Google’s vice president and “co-founder of the internet”, Vint Cerf.

And while there was much talk during the day about various potential for the USPS to move into new digital forms of communications, the Google vice president said that actually, the internet search giant would probably take advantage of the unique asset of the USPS if it was running the agency.

The unique asset he highlighted was the USPS physical delivery network, and the fact that the organisation’s mail carriers visit virtually every American home six days a week.

“I am convinced that until we get to the 24th Century, we are going to need the Postal Service as somebody to provide delivery services,” he said. “But since you are walking past every single mail box every day, except Saturday – is there anything else you can do with that feature?” 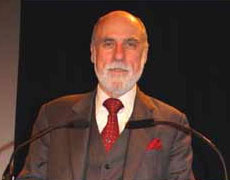 Cerf, who has received medals from two American Presidents for his pioneering work in the internet field, said if the Postal Service was going to survive, it would have to find new lines of profit.

But he advised: “If there is something the Postal Service can do with its footprint, it should be physical.”

He did discuss the possibilities of electronic mail, though he noted that his own involvement in the commercial email service MCI Mail had been killed off by free email services.

Cerf said he believed profits in delivery services in the future would be mainly found in overnight delivery, but also stated his belief that the US Postal Service could set itself up as an important trusted third party to provide the physical aspect of verification services, including certifying people through its Post Office network to ensure that individuals on the internet are who they say they are.

The role of USPS

Jeff Jarvis, the journalist whose book “What Would Google Do?” inspired yesterday’s event organised by mail industry association PostCom and postal consultancy Ursa Major Associates, suggested a more fundamental re-think was needed on the role of the Postal Service in the digital age.

But his particular warning was that the without a clear idea what kind of business it was in, USPS could flounder like other giants have already in the digital world.

“AOL was Facebook before Mark Zuckerberg even started shaving,” he said. “But they asked the wrong question about what business they were in. They thought they were in the entertainment industry, merged with Time Warner, started making movies. They were wrong.”

Jarvis, a blogger and associate professor of interactive journalism at the City University of New York, said that judging from the experience of newspapers, the Postal Service should not attempt to move into digital communications through incremental change, but make a bold step.

“The newspapers went in to digital step by step, and that failed,” he said. “I just spent two days with a newspaper that thought it had gone through everything the right way – and it now has to cut itself in half.”

Making the most of the physical address

Larry Weber, who founded the world’s largest PR agency Weber Shandwick before stepping out to form a new firm focussed on digital communications, W2 Group, also advised the Postal Service to build on its unique assets, in particular its valuable physical address database.

Weber, whose career has included leading the global marketing of HTML, said there were “huge opportunities” for the Postal Service in the current boom in social media, although he said collaborative working would be key to its success.

And, with the world of marketing rapidly moving towards a basis on personal recommendations from consumer to consumer, rather than broadcasted messages, Weber suggested there could be particular potential for the Postal Service in a social network based around the change-of-address system.

“By far the most important way people are make purchasing decisions is by recommendation,” he said. “The important thing with this social network is that when I move, in my new place I want to know where my friends go, what they do.

“I don’t think it would be complex,” he added. “It would be protected, secure. You change your address, and now you can get a lot of offers.”

Yesterday’s PostalVision2020 event saw a number of people stressing the benefits of collaborative working and for the USPS to encourage independent entrepreneurs to get involved with its digital development.

The USPS should be an enabler of digital communications, rather than a provider, said various speakers and delegates – opening up its platform for independent developers to benefit and benefit from the platform, as has been seen in Apple’s iPhone and Google’s Android platforms.

With suggestions at the event that the USPS should look to get into areas of innovation closed to private sector developers, Jennifer Tomlinson of Canada Post-owned IT technology firm Innovapost said the address database would prove a “critical” asset for a Post in the digital age.

She said: “The private sector can provide digital platforms, but there are gaps in what they can provide. A digital platform linked to the physical, for example. Facebook can tell you everything about what someone is doing, but can’t tell you where they are living.”

Marshall van Alstyne, an associate professor at Boston University, who particularly supported the concept of the platform, spoke of the need for USPS to create a “sandbox” in which independent developers could try things and innovate with a USPS digital service.

He said a USPS platform should look to combine different applications, in the same way that Apple’s iPhone now offers phone calls, videos, an MP3 player, electronic books and various other options. “Apple has been killing standalone platforms,” he said. “Microsoft’s Zune MP3 Player was killed off, and now the iPad has come along and the Kindle’s revenues have dropped 22%.”

“Don’t just have a product strategy,” he said, “You need a platform strategy to survive in the digital world.”