The city of Halifax, Nova Scotia, has become the latest in Canada to receive a new delivery system for letters and parcels this week, with its letter carriers taking on a broader role. As part of Canada Post’s $2bn modernisation programme, revamping infrastructure and processes throughout its network, the Corporation is consolidating delivery operations and making the work of its mail carriers more diverse and efficient.

In Halifax from this week, as has already been seen in parts of Toronto, Montreal this summer and Winnipeg from last fall, there will no longer be separate carriers to deliver mail on foot, to deliver parcels in vehicles and collect mail from on-street mailboxes.

A single letter carrier will be motorised to take on all these tasks on their given route.

And with new presort machines being installed in cities across Canada – Multiline Optical Character Readers (MLOCR) each capable of sorting 45,000 letters per hour – the newly re-named “delivery agents” will also spend less time putting letters into sequence to deliver to households on their routes.

In Halifax’s Almon Street station three of the MLOCR machines have been installed, while larger cities have six or more of the machines.

Next year, more areas in Canada, including Calgary, will be switched onto the new system.

“Providing them with a vehicle now, they will do the job of picking up and delivering parcels, picking up relay boxes, end-of–street letterboxes, in addition to delivering the mail in their particular routes. This really makes them owners of the routes in which they serve – they become much closer to their customers, but at the same time it creates efficiencies for us and helps us compete more in the parcel business.” 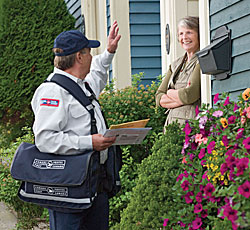 As well as new presort machinery to help the delivery agents, portable terminals are being provided to help with tracking services and handle incorrect addresses.

The new delivery methods are based on those that have been in use south of the border in the US for decades, according to Canada Post, which believes that along with the upgrades to its infrastructure, the new process will bring annual savings of $250m a year from 2017.

“When we started our Postal Transformation, we had not updated our equipment or our delivery process in almost 30 to 40 years,” said Losier. “We definitely needed to reinvest in the company, and we needed to take advantage of the changing trends – less letters, more and more parcels.”

The more efficient delivery process will allow for a reduction in Canada Post’s 65,000-strong work force, the Corporation told Post&Parcel, but slimming down the workforce by about 3,000 will be achieved through attrition, said the Corporation’s spokesperson.

Along with the reduction in workforce, the Canadian Union of Postal Workers has denounced the service changes, warning that the need for carriers to spend more time on their routes will mean delays in mail delivery.

Trevor Beckerson, president of the Nova local unit suggested mail could arrive at some addresses at 10pm at night – and as a result, delivery agents would have to contend with the forces of darkness as well as the prospect of parcel pickups.

Other potential health and safety concerns with the new system cited by the union include how fluctuating parcel volumes might overburden carriers. These concerns proved a key issue within the summer’s strikes by CUPW members, and have prompted three grievances being filed against Canada Post.

The Corporation’s spokesperson said each of the grievances had been rejected by the arbitrator, and insisted that Canada Post has “done its homework” in training workers for the new double-bundle delivery method.

“We have studied it from an ergonomic perspective, we have provided lots of training – we took the union with us to Montana to see the new method at work – and as have a letter carrier school for our carriers to learn about the new method and practice it,” said Losier, who accepted that it was a “huge” change in delivery process for carriers to take on.

“The bottom line is, we would never do anything to harm our workers, it would be very counterintuitive to our being more productive,” she added.