Hermes Germany has opened a new EUR 6.6m depot in northern Germany sporting environmentally-friendly technologies including a solar array that can also generate electricity for local households. The 4,400 square metre facility in Bardowick in the Lüneburg district of Lower Saxony was completed after seven months of construction, and boasts state-of-the-art sorting equipment capable of processing 4,000 items each hour, or around 4.4m items a year.

The facility has good transport links close to the A39 highway.

Hermes said the facility first started up last month, with 44 employees based at the site.

Every day, the plant will sort around 15,000 packets to be delivered to around 10,000 households and 140 parcel shops in the area.

He said there was room at the 20,000 square-metre site in Bardowick to further expand the new facility with an expanded hall and additional loading bays.

Nölling said of the need for new sorting capacity: “E-commerce and mobile commerce will increase dramatically in coming years. In terms of a sustainable economy, we set up our new buildings and for future growth.”

Hermes Germany has invested around EUR 120m in 18 new facilities around Germany over the past two years.

The new facility in Bardowick has been completed according to the silver standard of the German Sustainable Building Council. Hermes said from the planning stage of the project, it had incorporated sustainable technologies like low-carbon heating and lighting systems and insulation techniques.

The plant’s heating is generated from carbon-neutral biomass, while power comes from a 3,200 square metre solar power array on the facility’s roof, generating about 215 megawatt-hours of green electricity each year – even feeding into the national grid to supply around 60 local households with renewable electricity.

Hermes said the facility was also designed in cooperation with the Nature Conservation Germany (NABU), to include nesting boxes for birds and bats for commercial space.

Speaking at the opening ceremony at the plant this week, Manfred Nahrstedt, the district administrator of Lüneburg, said: “Especially in view of the future with further increasing package volumes and the associated, higher traffic levels, the logistics industry is increasingly asked to act ecologically. Hermes is showing with its sustainably-designed site that logistics and air-conditioning and environmental protection are not mutually exclusive, but can go hand in hand.” 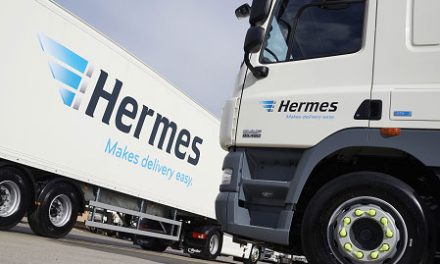