Engineering giant Northrop Grumman has filed a lawsuit against the US Postal Service claiming breaches of a $874m contract to provide Flats Sequencing Systems. The contract regarded the purchase and installation of around 100 FSS machines under the Postal Service’s modernisation programme, which has been working to improve mail processing efficiency.

FSS machines can sort flat-shaped mail, such as periodicals, into delivery sequence order, so that mail carriers do not need to spent time putting mail into address order for their routes prior to their daily round.

Northrop Grumman said that from the installation of the first FSS machine in Dulles, Virginia, in late 2007 through to the completed deployment of around 100 FSS machines in 2011, USPS “improperly” took over design control for the machines and “ignored” performance specifications in the deployment of the systems.

USPS engineers required “thousands” of changes to design drawings as the machines were deployed, Northrop-Grumman said.

The result was “significant” delay and disruption to the contract, said Northern Virginia-based Northrop Grumman.

From July 2010 through to last year, Northrop Grumman demanded three payments from USPS to cover the delays in the contract for the FSS machines and unpaid contract fees totalling just under $180m for non-payment of invoices.

Northrop Grumman explained in its first quarter filing to the US Securities and Exchange Commission: “Some of the company’s claims are for unpaid portions of the contract price ($63 million) and direct costs incurred. Other claims are based on the company’s assertions that through various acts and omissions over the life of the contract, the USPS adversely affected the cost and schedule of performance and materially altered the company’s obligations under the contract.” 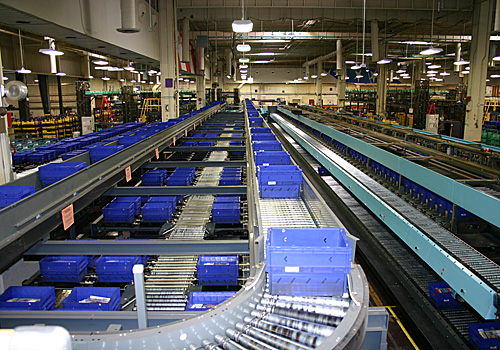 One of the first FSS machines installed on the Northrop Grumman contract, at Dulles, Virginia

In reply to its demands, Northrop Grumman received a refusal to pay and a counter-demand from the Postal Service to pay it $341m for late delivery of the machines and on the grounds that delays in the project meant expected mail operations cost savings did not materialise.

“The USPS claims appear to the company to be primarily that, due to delays in performance, the USPS was damaged because it did not realize certain cost savings it expected from deploying the systems earlier,” said Northrop Grumman in its SEC filing.

Northrop Grumman said in the statement that it intends to “vigorously” pursue the matter. The claim in the lawsuit filed with the US Court of Federal Claims on 4th May was for $178.9m.

The company, along with USPS, were not commenting further than the documents issued in the case.

James F Palmer, the Northrop Grumman chief financial officer, told investors at the end of April that his company was in the process of downsizing its domestic US postal automation business going forward.