Creating a digital reputation for the US Postal Service

James Cartledge looks at initial ideas for the US Postal Service’s new Digital Solutions unit, and the potential for the world’s largest post to move further into the digital sphere This week’s PostalVision 2020 conference in Washington DC was all about platforms – about how the giants of the Internet world have created neutral spaces where external developers can convene to make the most of core assets to generate their own revenue, and take those core assets far beyond the original capabilities of which the likes of Google, Facebook, Apple or Amazon could have achieved alone.

Taking part in the discussions, just a few weeks after creating a brand new Digital Solutions unit, the US Postal Service was certainly interested in the conversation, although it pointed out that in reality, in many respects it already has a platform – one upon which a $1 trillion US mailing industry depends.

But the new USPS president of digital solutions, the former chief marketing officer Paul Vogel, told the audience at the conference across the plaza from USPS headquarters that his focus now was to replicate that kind of platform in the digital world.

The potential power of the US Postal Service in the digital space should not be underestimated, although delegates at PostalVision questioned the legislative freedom and creative ambition of USPS to follow through on such potential.

While Google, Facebook, Amazon and Apple garner much more press coverage thanks to their investment opportunities, the US Postal Service is at least on a par with them in terms of revenue, with only Apple’s $108.2bn annual revenue surpassing US mail revenues, while the Postal Service brand has similar clout among Americans, with a huge trust factor.

Vogel said this week that after a year in discussion with stakeholders, USPS is now ready to “create a reputation” for itself in the digital sphere, although he was keen to stress it was still early days in deciding which ideas would be taken forward.

The USPS digital president said priority so far had been to get the Postal Service’s core physical mail products in order, but that with plans now in place to do that, attention could turn to areas like hybrid mail and digital authentication services.

Vogel said what his team would do was build on key USPS assets like the strength of the brand, security and the presence of the Postal Inspection Service to “create a digital reputation” for the Postal Service.

The Postal Service does already have a central digital asset from which it can build its digital platform – the usps.com website already claims more than a million visitors a day.

The website has already taken a sizeable slice of the retail action from the brick and mortar post office network in the United States, with alternative access points now accounting for close to 40% of retail income, and the Internet accounting for more than half of that.

“To say we are very trusted is very true, but to say we are trusted as a digital agency is not”

Initially, the Digital Solutions unit will be working to enhance the core USPS business in a digital direction, Vogel said. This process already began last year with significant updates to usps.com and has continued this year with expansion of the Click-N-Ship online postage service into the small business sphere.

Vogel highlighted the need for work on the PostalOne!, the web-based mail data acceptance platform for commercial mailers, which has been frustrating mailers with what the USPS digital president termed “inexcusable” down time.

And, he also noted the cross-over of digital technologies into the parcel space with the new GoPost project, the US Postal Service’s own trial of automated self-service parcel lockers.

After the Postal Service received some flak at this year’s PostalVision for not working well with partners in some areas – which Vogel did not accept was the case – the president of Digital Solutions said there was definitely a need for partnerships in his project, particularly after recent downsizing of the USPS workforce.

“We definitely need lots of partners,” he said. “We need people that can go out and develop applications in a less controlled and regulated environment and that can then put those apps out there on our platform. There’s thousands of potential apps we won’t have the time or staff to write, and with partners that also helps absorb the risk.”

Partnerships is also a way to contend with a desire within some elements of Congress for USPS to avoid competing with the private sector. This aspect may affect some ideas that the Postal Service pursues, and the Postmaster General Patrick Donahoe revealed this week that USPS will not be aiming to set up its own digital mailbox service, since private sector firms are already offering such services.

Without changes in the 2006 PAEA law, the most recent postal reform legislation in the US, there are also potentially legal restrictions to contend with regarding some areas that the new Digital Solutions team might otherwise have wanted to go.

The US postal law currently limits USPS in providing non-postal services – for example, a recent trial selling American Express gift cards in post offices had to be billed as a postal product by suggesting to regulators that customers would be mailing those gift cards.

But Vogel said he believes there is enough flexibility in the rules to allow services like hybrid mail, since the process of emailing content for conversion into a physical letter locally to the recipient has obvious involvement with the mail system.

With e-commerce, there are also possibilities for new digital tools and applications linked closely with parcels, he said.

Catching up with Vogel after the conference, he told Post&Parcel that there are “so many definitions” of hybrid mail, but that one idea he was certainly interested in was how mailers could electronically send messages to be turned into physical letters close to their recipients.

To begin with, he said the Every Door Direct Mail (EDDM) service, which allows small businesses to more easily coordinate saturation mailings in their local neighbourhoods, was a “realistic” part of the service that could evolve to become a hybrid mail offering.

A hybrid mail EDDM would still use partner companies to provide local printing and mailing on the physical side of the service, Vogel suggested, but aim to be a simpler process for SMEs who likely would not have their own specialist marketing or direct mail staff member.

“We could create a very simple solution with EDDM,” Vogel explained. “It all starts on a computer anyway, we need to make the process easy so that a small business does not have to be a technical expert to get into using the mail.” 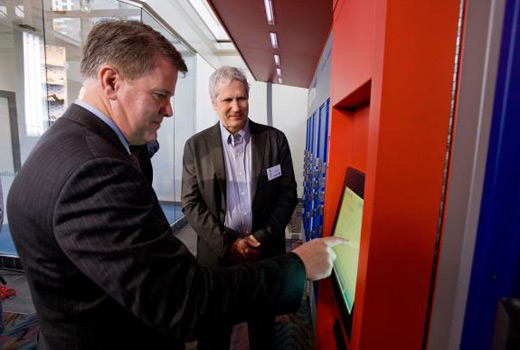 USPS has been trialling its “GoPost” parcel terminals in Northern Virginia

Asked about GoPost, the USPS parcel terminal project that appears to be working well since a trial of 20 units began in Northern Virginia earlier this year, Vogel said his team would be working on the digital side of the project.

“GoPost is really run by our Channel Access team, and engineering, but we are going to work on the electronic enhancements and areas like addressing issues and redirecting parcels – working with the e-commerce companies,” he explained.

With the Postmaster General highlighting the potential of the GoPost project within his keynote address at this week’s conference, Vogel also stated that the project was going well, and that there were plans to expand the project considerably.

Vogel said one of the key challenges was finding the right real estate for the parcel terminals, but that the Postal Service was very much on board with the concept.

“We are currently putting together the numbers to gain board approval for another 350 units,” he revealed, “which would go into generally metropolitan areas first. We are going live with this thing it’s absolutely the right thing to do in simplifying the delivery process and making it 24/7 accessible.”