US postal unions unite to combat “unprecedented attack” on USPS 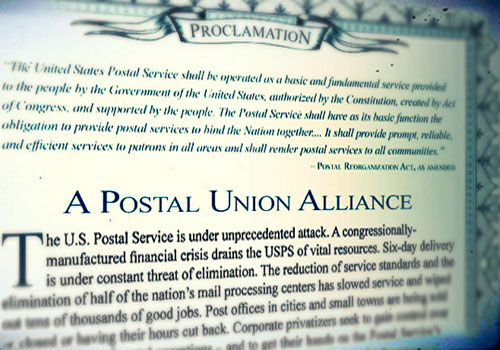 Four postal unions in the United States have formed an alliance to lobby jointly against perceived threats to the US Postal Service. The National Association of Letter Carriers, the American Postal Workers Union, the National Postal Mailhandlers and the National Rural Letter Carriers’ Association issued a proclamation earlier this month forming a “Postal Union Alliance”.

The proclamation stated that USPS was under “unprecedented attack” from a crisis it claimed was manufactured by the US Congress — a reference to the Congressionally-mandated payments USPS must make to the federal government to cover liabilities such as future retiree healthcare benefits.

The Alliance proclamation denounced cutbacks, sorting plant closures, the reduction of mail service standards and losses of “tens of thousands of good jobs” related to the Postal Service attempting to bring itself back onto an even keel having lost more than $40bn in recent years, and with projections suggesting it could lose $115bn by 2020 without corrective action.

Together, the unions said they would push for the protection of six-day-per-week mail delivery, the restoration of mail service standards and mail processing facilities and the provision of full-time, full-service post offices “in every community”.

The Alliance will oppose subcontracting of work, suggesting that such policies were “fueling the privatisation drive”, and demand the expansion of postal services to include postal banking and other services.

Dimondstein described the formation of the Alliance as “groundbreaking”.

“We have agreed to work together to defend a beloved national treasure,” he said. “Our efforts will benefit all postal employees and the people of this country who expect and deserve a vibrant, public Postal Service for generations to come.”

NALC said in a statement: “The goal of the alliance is to enlist public support in preserving the national treasure that is the U.S. Postal Service. The USPS is based in the Constitution, provides Americans with the world’s most affordable delivery network, and is operationally profitable without using a dime of taxpayer money.”