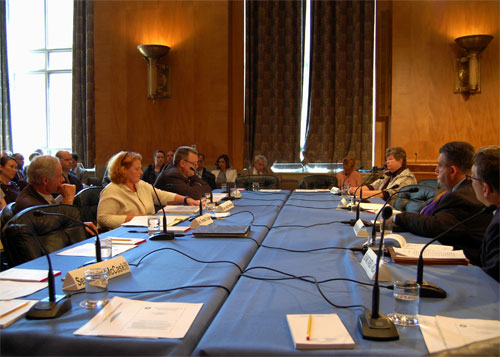 America’s community newspaper industry raised concerns before Congress yesterday, regarding the standard of rural mail delivery.
The National Newspaper Association said the drop in rural mail standards was predictable, with a slow decline seen over the past three decades.

But the Association’s chief executive Tonda Rush told the Senate’s Government Affairs committee yesterday that the ongoing consolidation of the US Postal Service mail network is now accelerating the problems, leading to “enormous complaints” from rural publishers.

Rush explained that with local mail facilities closing, rural mail now has to travel much greater distances to be sorted, which impacts on delivery time.

“We’re losing subscribers, and we’re hearing a lot from publishers about the economic impact on small towns of the rural mail service declines,” she said.

The Postal Service closed around 141 of its mail processing facilities nationwide in 2012 and 2013 to save $850m a year in operating costs.

With Congress doing nothing for years to help reform the federal agency in the light of current mail trends, USPS has been planning to close about 82 more of its mail plants in 2015 to save an estimated $750m a year more.

“We’re very fearful of what we will encounter if the 2015 closures proceed,” said Rush. “Certainly the experience so far has not been positive. We believe that 99% of our problems have been created by the decline of the network.”

The NNA, which has more than 2,300 members across the US, told Congress it believed the Postal Service itself, and Postmaster General Megan Brennan, were sympathetic to the problem, but that they had got to the point where only Congress could help.

“The problems are systemic, and at this point what we really need is for Congress to move a bill to stop this bleeding so that the Service can stop declining,” said Rush.

Also speaking during yesterday’s Committee Roundtable on rural postal issues, the National President of the National Association of Postmasters of the United States (NAPUS), Antony Leonardi, said his members saw the impact of USPS plant consolidations “every day” in their post offices.

Leonardi said: “Nationwide, first quarter 2013, 93.4% of three-to-five day First Class Mail arrived on time. During the second quarter of 2015, only 62.5% of that mail arrived on time, a drop of over 30%. Winter weather contributed, but it is not the sole reason for the drop. Operational changes have also been a contributing factor.”

The NAPUS president said the biggest need from Congress was to fix the Postal Service’s multi-billion dollar annual payment obligations to the federal government to cover future healthcare liabilities.

Without a fix, he said the Postal Service would lose its customers.

“We will be unable to attract and maintain business mailers if we slow down the mail,” he warned.

Last year was the first time the Postal Service failed to meet its delivery targets for First Class Mail according to Margaret Cigno, Director of the Office of Accountability & Compliance at the Postal Regulatory Commission, although she said bad weather did play a part in the problems.

Democrat Senators on the Republican-controlled Committee said they hoped Congress would be able to help the Postal Service take “a more thoughtful direction” in reforming rural mail delivery.

Jon Tester, the Senator from Montana, said: “Standard of delivery is important. If it’s not timely, it’s a step back. And if we’re trying to make the Post Office solvent by reducing service, we’re going to go in the opposite direction.”

Yesterday also saw US Congressmen representing the State of Oregon writing a letter to the US Postmaster General expressing concern about mail service standards and the closure of mail facilities.

“We have heard concerns from our constituents that mail delivery times, including important prescriptions, are increasing. Further mail delays will impact Oregon families across the state who depend on the USPS for receiving paychecks, mailing bills and critical correspondence.”

The Congressmen called on Postmaster General Brennan to shelve plans to close further mail plants in the state until potential impacts on service standards had been “thoroughly reviewed”.