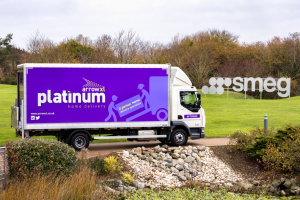 Under the terms of the agreement, ArrowXL will provide a dedicated range of premium delivery, in-home and recycling solutions for Smeg UK’s customers.

Smeg UK has chosen to exclusively use ArrowXL’s Platinum service for UK-wide deliveries of its larger products, including its refrigerators and freezers.

The ArrowXL delivery solution includes specialist handling, assembly, installation and connection of high-value items. In addition, ArrowXL will also provide aWaste Electrical & Electronic Equipment (WEEE) recycling service for consumers requiring the removal of any white goods being replaced. It is expected the company’sdelivery crews will make approximately 300 deliveries each week.

Smeg UK previously used its own in-house logistics network – and it expects that working with ArrowXL will help with its plans for growth.

Smeg UK will also benefit from ArrowXL’s technology offerings. For example, ArrowXL’s Platinum service is supported by AskAxl, the company’s web app that provides visual tracking of the delivery vehicle and dynamically updates timeslots to reduce the delivery window to just 30 minutes.

Robert Ponting, Operations Director at Smeg UK, commented: “We were thoroughly impressed by the development of the AskAxl app, which enhances consumer convenience and control. This ambition ensured that ArrowXL was the natural choice for Smeg UK.”