DHL testing use of “smart” robots in warehouses 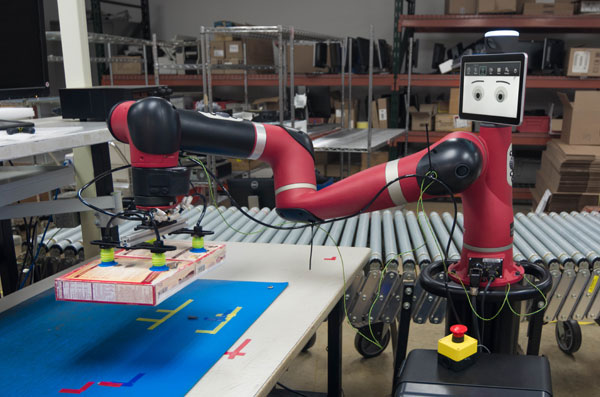 DHL has announced that it is currently testing robots in its warehouses, to see how they carry out “value-added tasks” such as assembly, kitting, packaging and pre-retail services. The robots Baxter and Sawyer – from Rethink Robotics – are described as “smart” and also “collaborative”, which means that they work in tandem with humans.

DHL is currently testing how to integrate several Baxter and Sawyer robots into various operational sites across the globe. DHL also recently bought its first Sawyer robot and its research entails 3D printing possibilities to create specialized grippers for the robots to allow for additional tasks to be completed in the warehouse.

“Baxter and Sawyer robots are some of the most advanced collaborative robots on the market, and we plan to deploy them in a variety of packaging and inventory tasks that will allow us to use our employees for higher value work,” commented Adrian Kumar, Vice President of Solutions Design North America at DHL Supply Chain.

“By deploying these robots to work in tandem with humans, we can ensure our production lines are adjusting to changes and running more efficiently year-round.”

With Baxter and Sawyer, DHL is now able to leverage automation that can adapt to real world variability, change applications quickly and perform tasks like people do.

Markus Kückelhaus, Vice President Innovation and Trend Research, DHL Customer Solutions and Innovation, added: “The logistics industry has been unable to leverage smart, collaborative robots until recently, and the high performance Sawyer robot is changing the game in what we can and cannot automate.”

Earlier this month, DHL revealed that it has been running a pilot test using two EffiBOT automated trolleys from the French start-up Effidence for “collaborative automated order picking” at one of its warehouses in Unna, Germany. And in March, the company published a “Robots in Logistics” Trend Report, which argued that the time is fast approaching when “robots are going to become essential in the world of logistics”.