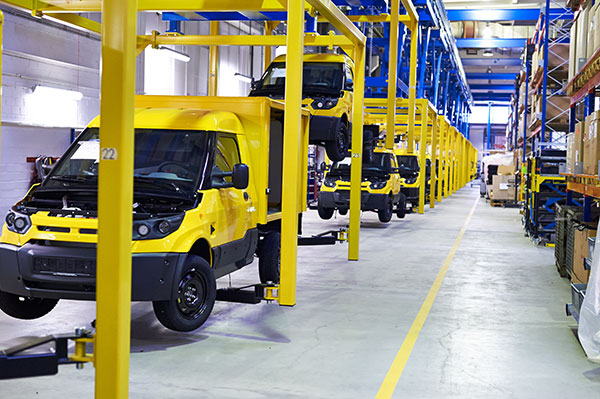 Deutsche Post DHL Group’s StreetScooter has confirmed that its second manufacturing facility for its electric vehicles will be built in Düren and be capable of producing up to 10,000 e-vehicles a year. Operations at the 78,000 square meter facility, owned by the automotive supplier Neapco, will begin in the second quarter of 2018.

With factories in both Aachen and Düren, StreetScooter will reach the production capacities announced this year of up to 20,000 e-vehicles a annum, with another expansion possible if the facility switches to two or even three shift operations.

“We are now beginning the next phase of development at StreetScooter and showing the world the extraordinary powers of innovation at Deutsche Post DHL,” said Jürgen Gerdes, CEO of Post – eCommerce – Parcel at Deutsche Post DHL Group. “Our goal is and remains market leadership in green logistics. We will therefore continue to focus on e-mobility and other alternative drive concepts to further reduce greenhouse gas emissions.”

In addition, Deutsche Post is now testing several hundred StreetScooter WORK L’s equipped for the first time with fuel cell drives. These vehicles could travel over 500 kilometres and Deutsche Post DHL Group is planning test runs for the next two years.

StreetScooter is also ramping up its activities on its “third-party sales” – with “industry-specific solutions”. These include the “Bakery Vehicle One” (BV1), an electric 3.5 ton van that the company has developed together with bakery companies for bakeries and other trades.

Ten versions of the BV1 each with two battery sizes are now available for ordering. Chassis variants will be built by StreetScooter in partnership with the company TBZ Fahrzeugbau.

Deutsche Post DHL said that StreetScooter is “already either in talks or enjoying active business relationships with” companies in other industries, including energy providers, waste disposal companies, municipalities and airports, facility management enterprises and catering companies. StreetScooter will produce variants tailored to serve a variety of individual needs with such features as variable loading volumes that include power supply, refrigerated containers and tilting load platforms.

“The boost in production capacity will make us better and faster in our efforts to serve third-party customers and meet their heavy demand for our e-vehicles,” said Achim Kampker, CEO of StreetScooter. “In addition, our industry focus and flexible manufacturing methods have put us in a position to produce electric vehicles customized for customers from industry, municipalities and trade. That is something unique on the commercial vehicles market.”