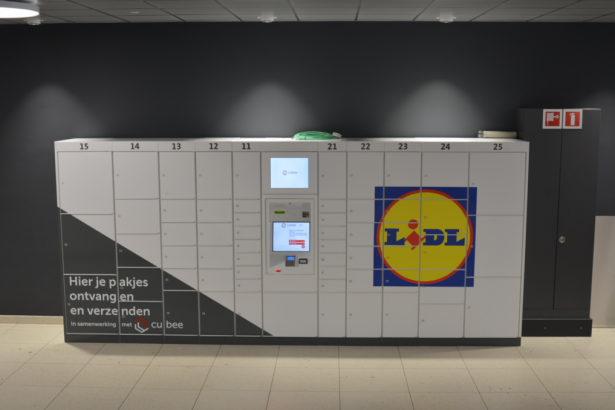 Retailer Lidl has installed three new parcel locker terminals for online grocery orders in the Belgian cities of Evere, Hamme and Ekeren. According to local sources, Lidl will be running a year-long test for the new facilities and it will be offering a 20% discount on fruit and vegetables to promote the locker service.

“After the order has been submitted to lidl-shop.be, the customer receives an order number by email. After that, the shopper has only to present the code at the pick-up point.”

Each terminal incorporates 58 individual lockers of various sizes. Orders can be collected during the stores’ opening hours. The cost is €2.99 per delivery.

Lidl is using the Cubee locker system. Cubee is a joint venture between the Belgian postal operator bpost and the Dutch company de Buren. As previously reported by Post&Parcel, Cubee is a carrier and retailer-agnostic “open network” – so customers can use the lockers at the Lidl stores to send or receive packages from other retailers.